The Hunters gained revenge for their round three defeat against the Devils in Port Moresby and have now won six of their seven matches on the road this year, after struggling in 2016.

The home side were the first to put points on the board via centre Luke Pollack just five minutes into the game, however the visitors replied through in-form fullback Stargoth Amean a few minutes later.

A damaging run from David Loko, who was stopped just short of the try-line, set up the Hunters' second of the afternoon, with the ball shifting wide to centre Willie Minoga to score off the following play. 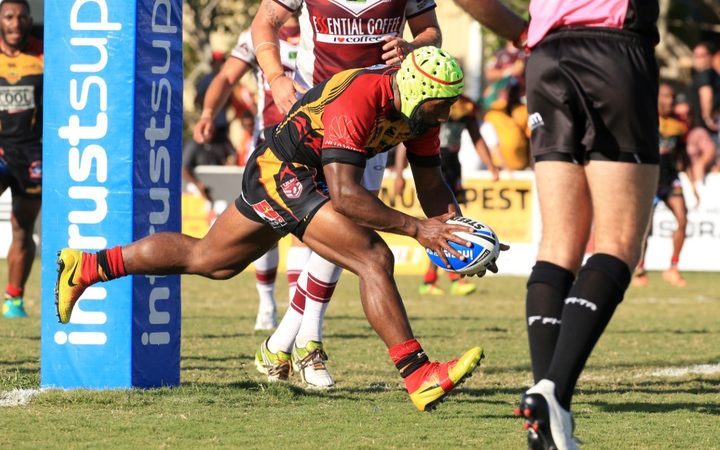 Adex Wera was among the Hunters try-scorers. Photo: Courtesy of www.qrl.com.au

The hosts fired back back with Javern White crossing over after a good draw and pass play, with Chris Sandow converting the try and slotting a penalty goal just before the break to level the scores at 12-12 at halftime.

The Hunters began the second spell in style, with Willie Minoga bursting into a hole to set up winger Adex Wera to score seconds after the restart.

Bland Abavu capped his 50th match for the club with a try, after the Devils had coughed up possession.

The home side rallied as Broncos-contracted player Matiu Loce Henry set up White for his second try, to cut the deficit to four points.

But the Hunters forwards took control in the final quarter of the match, with Stanton Albert, Nixon Putt and Moses Meninga adding some gloss to the scoreline.

Michael Marum's side have a one point lead over the second placed Sunshine Coast Falcons, who beat Ipswich 36-16.