Tuvalu's prime minister, Enele Sopoaga, ordered his officials to cancel any cooperation with the United States on Friday, calling the country's decision to withdraw from the Paris climate change agreement distressing and destructive.

"I have instructed my officials not to talk any climate change issues with this country until a new policy is put in place," said Mr Sopoaga in an interview, hinting that the break could go even further. "I think it doesn't make any sense to talk about any other thing if we don't fix the problem of climate change."

Mr Sopoaga was one of many Pacific island leaders to react with disappointment and disbelief at President Donald Trump's decision to withdraw the world's largest economy and second-largest polluter from the agreement, embracing isolationist voices within his administration who argued that it was a threat to American sovereignty and the economy.

The Paris Agreement was signed by all but two of the world's countries in December 2015, with each signatory agreeing to lower their greenhouse gas emissions in an effort to stave off the most drastic effects of climate change. 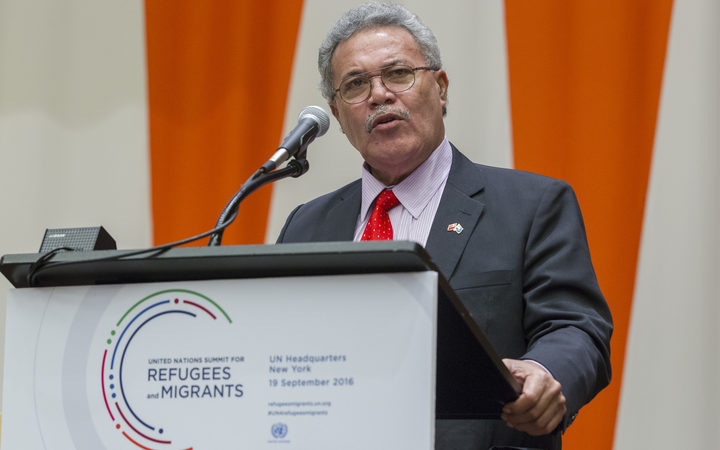 Negotiations for the deal received a significant push by the administration of former president Barack Obama, who at the time said the agreement sent a "powerful signal that the world is fully committed to a low-carbon future."

A year-and-a-half later, America no longer takes that view. In announcing the withdrawal, Mr Trump said the pact was a "draconian" deal that imposed unfair environmental standards on American businesses and workers, making good on a campaign promise to cancel an agreement he had never been fond of.

But in the Pacific, one of the regions bearing the brunt of rising sea levels and changing weather conditions, the agreement had been welcomed as a commitment by the world's countries to try and offset emissions, and thus save their threatened islands.

One of the countries on the frontline of climate change is Tuvalu, a group of nine thin coral atolls which rise little more than two metres above sea level. Already, the ocean is marching in, with waves and king tides nibbling at the shore, roads and houses. Crops are shrivelling and water supplies are being penetrated by salt water. The country was also hard hit by Cyclone Pam in 2015, a category five storm whose intensity has been linked to changing weather patterns as a result of climate change.

"We are very, very distressed," said Mr Sopoaga. "I think this a very destructive, obstructive statement from a leader of perhaps the biggest polluter on earth and we are very disappointed as a small island country already suffering the effects of climate change."

Fiji's prime minister, Frank Bainimarama, who is chairing the next round of United Nations climate change talks in November, said the decision was deeply disappointing for people in vulnerable nations.

"I did what I could -- along with many leaders around the world -- to try to persuade President Trump to remain standing shoulder-to-shoulder with us as we tackled the greatest challenge our planet has ever faced," said Mr Bainimarama in a statement. "While the loss of America's leadership is unfortunate, this a struggle that is far from over." 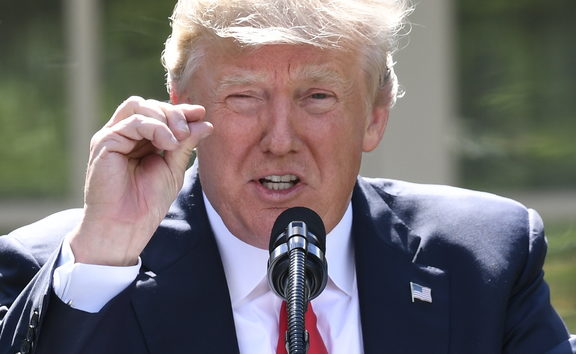 US President Donald Trump announces his decision to withdraw the US from the Paris Climate Accords in the Rose Garden of the White House in Washington, DC, on June 1, 2017. Photo: SAUL LOEB / AFP

The president of the French Polynesian assembly, Marcel Tuihani, also expressed his dismay. "No electoral promise can prevail over the best interests of all humanity," said Mr Tuihani. "We regret that the president of the United States has no more consideration for the peoples of Pacific Island states, whose existence is threatened by the effects of scientifically proven climate warming."

Another threatened country, the Marshall Islands, a state in free association with the United States which hosts a military base, also criticised the move. Its president, Hilda Heine, said the decision would have grave impacts, and was confusing for those who supported US leadership on the world stage.

While the departure of the United States by no means undoes the multilateral United Nations accord, it does shake it. Even before Mr Trump's decision, many countries were struggling to meet their commitments for reducing carbon emissions by 2025. Now, with the United States walking away, the rest will presumably have to pick up the slack.

But while the Pacific was united in its indignation at the United States's retreat from climate leadership, they were united in the hope that it would not spell an end for the Paris agreement. Already, the European Union, India, Australia, New Zealand and many other nations have reaffirmed their commitment to the goals set out in the agreement.

And China, the world's largest polluter and second-largest economy, announced its intent to fill the void left by Mr Trump.

Mr Sopoaga said he was encouraged by the statements of other world leaders, and hoped the withdrawal of the United States would galvanise other countries to action.

"I think the world community will rise up to the challenge," said Mr Sopoaga. "We can move onwards, forwards and do what is right to be done in order to save the islands and save the planet."

"It will only go to solidify the commitment of other world leaders to ... try to achieve what is right to be done, because the other alternative would only be devastation ... really catastrophic for the rest of the world, not only small islands like Tuvalu," he said.

The coordinator of the Pacific Islands Climate Action Network, Krishneil Narayan, said that not even Mr Trump could derail action on climate change.

"Certainly we are really angered by the announcement," he said. "The United States is one of the largest carbon polluting countries. We here in the Pacific island countries are really going to double our action to help with ensuring that the world is going to support the Paris agreement and implement climate action."

And Mr Bainimarama said the action would only give greater impetus to form a "grand coalition" - sans the United States - to push on from the Paris agreement at the next round of climate talks.

For Mr Sopoaga, he said it needed to be proven that multilateralism can work and the world can move forward without a country "that looks inwards" and had an "isolationist" approach.

"We must not be dissuaded by this very, very backward and backsliding, destructive decision from the United States of America," he said.