A new book containing rare photos from private albums dating back to when many Germans resided in Samoa has been released in Apia this month.

Titled To Walk Under Palm Trees, the book is a result of five years work and contains rare photos sourced from private family collections dating back to the nineteenth century. 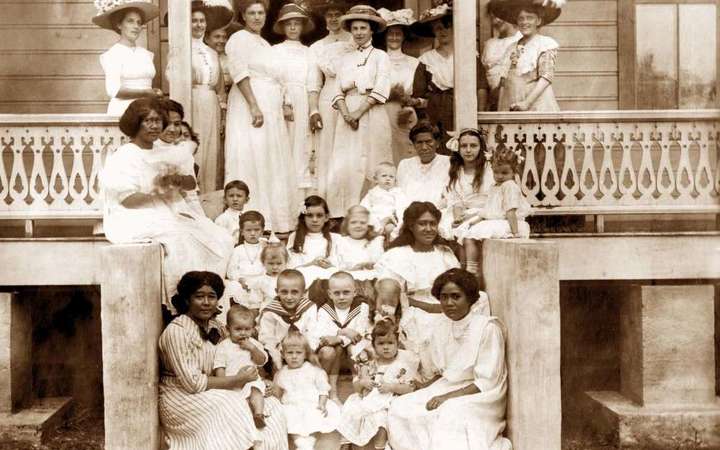 Samoan author, Tony Brunt, said it had all started when, researching his family tree, he became fascinated by photos never seen before which captured Germans making a living and residing in Samoa.

"Well I wrote the Brunt family history some years ago and I met a distant cousin to look at her Brunt stuff. I came away pretty excited at the German photography that she had, and it got me interested," he explained.

He then wondered whether there were any other private collections elsewhere that hadn't been seen widely before and which could be deposited in the digital archives of the Museum of Samoa.

He noticed the Germans tended to have some of the best camera gear for that time, which resulted in high quality photos, although some pictures he needed to touch up.

The earlier people left Samoa and took their albums, the better.

"Samoa was quite a tough climate for photos with heat, mould and moisture, not to mention cyclones," said Mr Brunt. 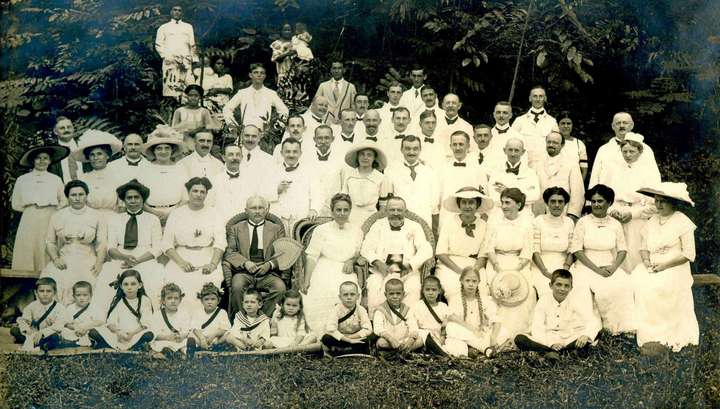 "The quality was so astounding and that surprised me that so many people had preserved their albums and collections so well with photos going back to the 1870s and 1880s in very fine condition."

He put out a call to find for more photos and scanned lots of albums with the consent of owners.

"Then fairly quickly it became clear that there were some magnificent collections that had never been seen before that were historically important," he said.

The latest photo acquisition is from Europe, Mr Brunt explained.

"We've just been given a massive digital copy of an album from this woman in Holland whose grandfather was the last general manager of the large German company in Samoa, the DHPG (Deutsche Handels- und Plantagen-Gesellschaft)."

"This album has 500 photos with 350 images from Samoa and 150 images from Tonga. The photos were all shot by employees of the company and have not been seen publicly before."

So Mr Brunt began putting up photos onto a website, which then led to an online photo exhibition and later an e-book. 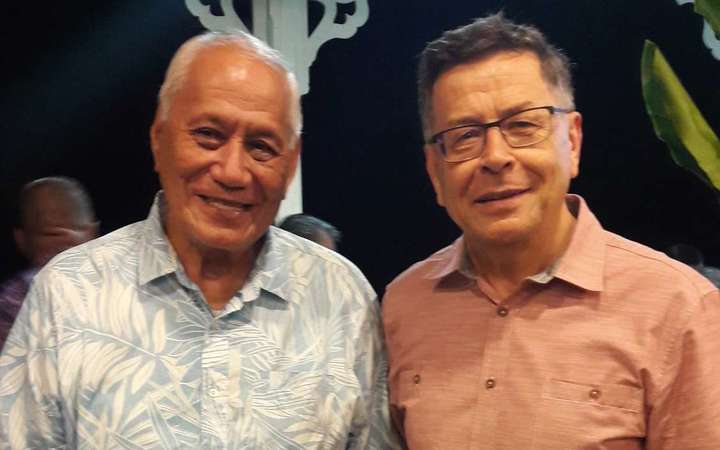 It has taken five years of work for him to get to this point of publishing a hard copy, where the Samoa Historical and Cultural Trust paid a lot for the high quality full colour 250-page book.

"One of the primary motivations is to get these photos that are historically significant out of purely private collections and into the digital archives of the Museum of Samoa. That is a primary goal," he said.

"We don't want these albums when people no longer have a use for them or when they are pass on to end up in rubbish skips out on the street outside their homes."

There is a limited print run of one thousand copies.

"It is on sale in Apia and I think the Samoa Historical and Cultural Trust who published it will have an outlet in Auckland," he said.

Tony Brunt says there is so much more material and encourages people to still get in touch.

"We won't turn down any collections. I am a bit like an alcoholic that needs another drink. So people who say they have a good collection, I get really excited." 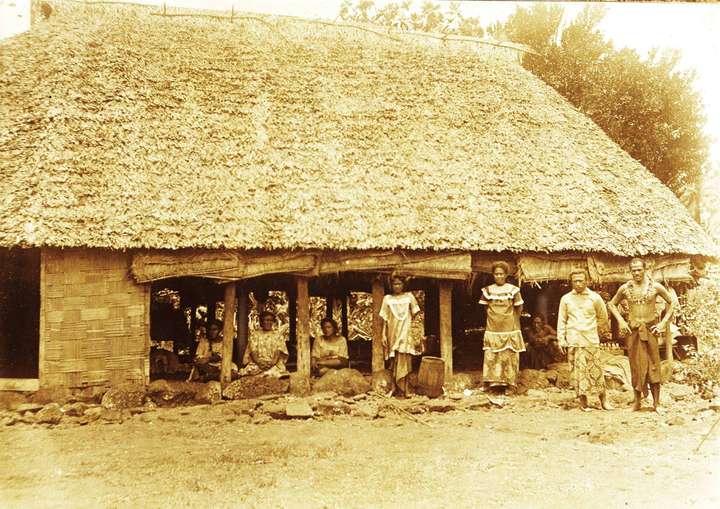 Photos of great human interest, which have historical significance or are of exceptional quality are preferred and as well as Europe, albums have also come from as far as America.

"There is already enough stuff for a volume two and three," he said.

AN EXTRAORDINARY STORY : FATU FROST in the words of Tony Brunt

"In the book there is this great story of this young Samoan who was adopted by the last German Governor of Samoa, Erich Schultz. His name was Fatu Frost, of Fasito'outa. And Governor Schultz, I think when he was a High Court or Chief judge, formed quite a strong friendship with the family took a shine towards their young son, Fatu.

So an unofficial adoption took place prior to World War I. When Schultz was taken to internment, when the NZers arrived, Fatu, who was just 17 years old at the time, volunteered to go into internment in NZ with him on Motuihe Island. I don't think Fatu realised he'd be there for like five years where they lived outside a guarded compound near the beach on Motuihe Island. 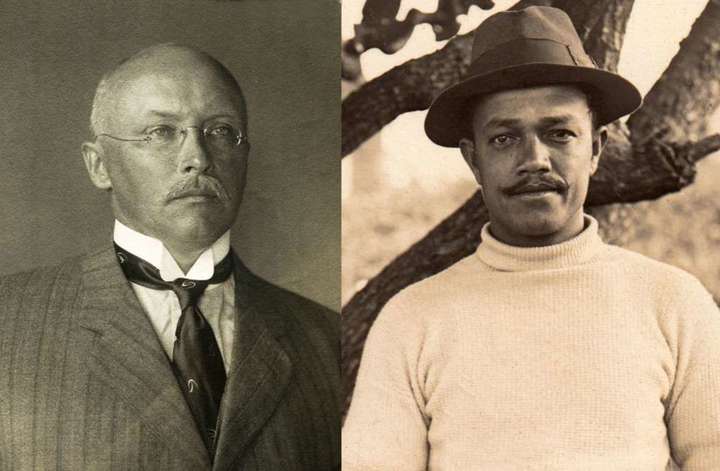 Then in 1919 Schultz returned back to Germany and took Fatu with him to live.Then Schultz married and had 3 children, and he called those children Aiono, Tuala and Fuatino. Then he asked Fatu, when Fatu said he wanted to go back to Samoa in 1921 or 1922, if he could return back to Germany with some Samoans in due course to confer those titles on his children officially.

So believe it or not, in 1924, Fatu did return to Germany with a party of 20 people, including from Fasito'o, 10 matai from that village all the way over to where Schultz lived at that time with his family.They conferred the titles onto his children and gave Schultz the title of Aiono. It is probably the only ever saufa'i ever held in Germany and then they returned back to Samoa. Extraordinary.

The other extraordinary thing too about Schultz was that he fell in love with Samoa and had been a judge in parts of Africa as well, but in Samoa he had a full pe'a done on his body in Samoa. Sometime after arriving in 1906, he had this full tattoo done and I know his family are still quite private about it but there is mention of it in another book, Samoa Under the Saving Gods. That was mentioned in passing that Schultz and a few other German officials had pe'a done. It was also confirmed by Schultz grand-daughter.

Schultz died in 1935 and Fatu died in 1956 and contact between the two families ended for many years but contact was re-established like a few years ago between Governor Schultz grand-daughter and Fatu's son, Leaupepe Fred Frost. "