Samoa will get an early look at one of their Junior World Cup rivals when they face Australia at the Oceania Under 20 Rugby Championship on the Gold Coast today.

The Baby Manu have been training together for six weeks in preparation for the Oceania tournament and the upcoming World Rugby Under 20 Championship in Georgia.

Samoa won the second tier Under 20 Trophy last year to earn promotion back to the elite division.

Head coach Junior Leota said testing themselves against Australia, New Zealand and Fiji will tell them exactly where there preparations are at.

"It's crucial that we get preparation right and I guess Oceania it's a first step on our journey," he said.

"Obviously we won't get any more warm-up games after this so coming to the Oceania and playing against Australia, New Zealand and Fiji is quite crucial.

On top of that we have Australia in our pool so it's good to get to know Australia early before we go to the Junior World Cup."

"I guess our approach to Oceania: we wouldd love to win it, there's no doubt about that," said Leota.

"But I guess it's a preparation. We're just trying to get everything right. We're trying to get our systems (to see) if it's working (and) if it's not working we've got enough time to fix it before we get to the Junior World Cup." 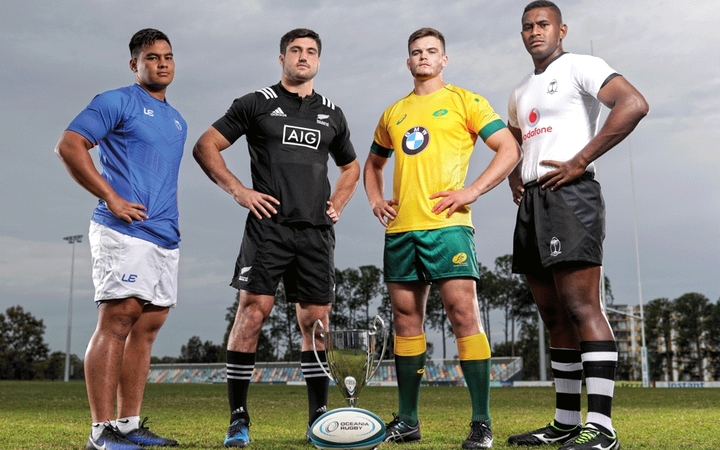 The captains of Samoa, New Zealand, Australia and Fiji pose with the Oceania U20 Rugby Championship trophy. Photo: Oceania Rugby

Fiji are the odd ones out on the Gold Coast with New Zealand, Australia and Samoa all preparing for the elite Under 20 Championship in Georgia.

Fiji finished third at the Under 20 Trophy in 2016 and will compete in the second tier for a third straight year.

Captain Daemo Mayanavanue said that makes the Oceania Champs all the more important, starting with their opening match against New Zealand.

"This is a really good opportunity for us to see where we are because we will be going to the Junior World Trophy in Uruguay in August," he said.

"We would just like to use this competition to see where we are and whether we can match up with tier (one) nations."-