Authorities in New Caledonia have opened shelters to cater for people as Cyclone Cook approaches.

The category-three storm is expected to hit the main island Grand Terre this evening.

People in northern New Caledonia have been ordered inside and are banned from moving about as Cyclone Cook bears down on the territory.

Cook is forecast to remain a category-three cyclone but the authorities warn it's still a serious threat to the islands.

The president of the Caledonian government, Philippe Germain, said because New Caledonia has not experienced a major cyclone since Erika in 2003 it was prudent to encourage people to protect themselves.

Strong winds and rain started lashing parts of Grand Terre and the Loyalty Islands this morning, downing power lines in some areas.

Cook has gained speed and moving about 20 kilometres an hour.

Authorities have raised the level two alert in the north of the main island and the loyalty group, a tourist hotspot, and they've brought forward the warning for the south by two hours to 6pm (local time).

The level two alert means people must take shelter and bans them from moving about.

Flights have been cancelled and the authorities have warned people to prepare while they can.

Meteo France expected the cyclone to pass over the centre of Grand Terre overnight and pass 50 kilometres to the south west of the capital Noumea by the morning.

The LIVE map below is provided by Esri

The territory has been told to expect winds of up to 200 kilometres an hour, very heavy rain and waves of up to ten metres as well as sea flooding at high tide.

Tourists have been evacuated from seaside bungalows and emergency shelters are preparing to open this afternoon.

Cyclone Cook will be the first to directly hit New Caledonia since 2003.

The adverse weather conditions also prompted the French education ministry to cancel some exams nation-wide because it is unsafe for those in the territory to go their tests. 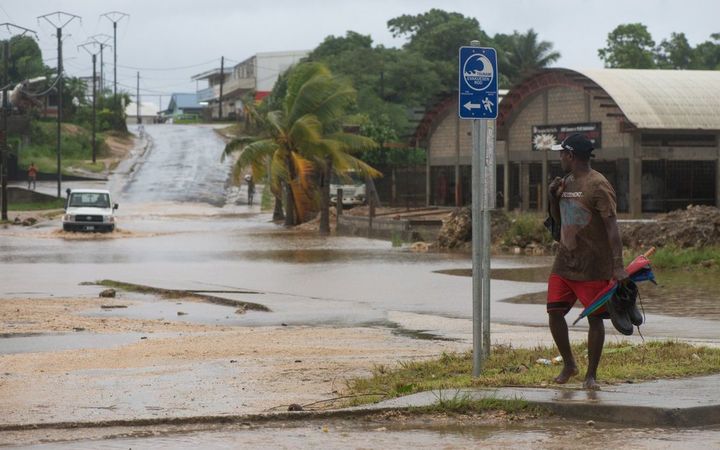 Red Cross in Vanuatu on standby

Vanuatu Red Cross volunteers are heading out today to check on damage and people's needs after Cyclone Cook hit.

He said the sudden upgrade from tropical depression to cyclone caused some confusion and he could hear people hammering during the night in preparation.

Mr Tevi said the Red Cross was on standby with supplies.

"In the few places that I have been around I can see banana trees are down. There's no sign of like damage to the buildings but we don't know whether people have been affected with the heavy rain. Even [at] the Red Cross we had to come in at the weekend and sweep the water out."

Ms Faerua said there was obvious damage to crops in areas around the capital but she said it was still not clear how the outer areas fared.

"Fruit trees like banana trees, cassava trees all damaged and down at the low lying area there's river flooding and food gardens are completely washed away. Information is still coming in and there's still to be assessment done and led by the government."

Ms Faerua said the loss of crops would be a major blow to people who were still recovering from the devastation brought by Cyclone Pam two years ago. 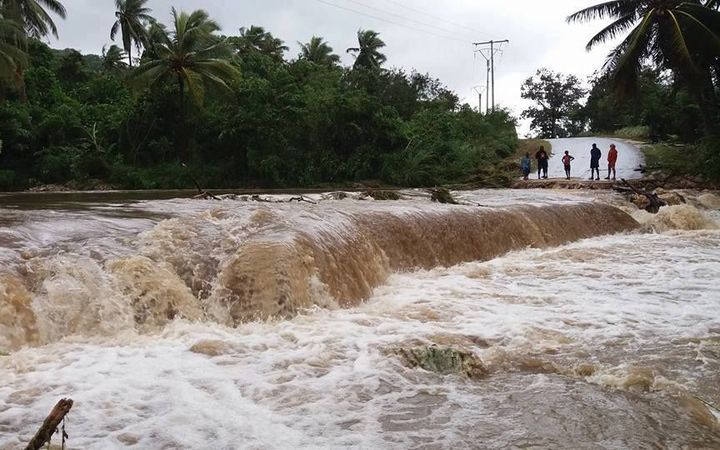 A creek in North Efate has rendered the ring road temporarily impassable. It's designed to handle overflow, but water volumes are unsafe. Photo: Dan McGarry