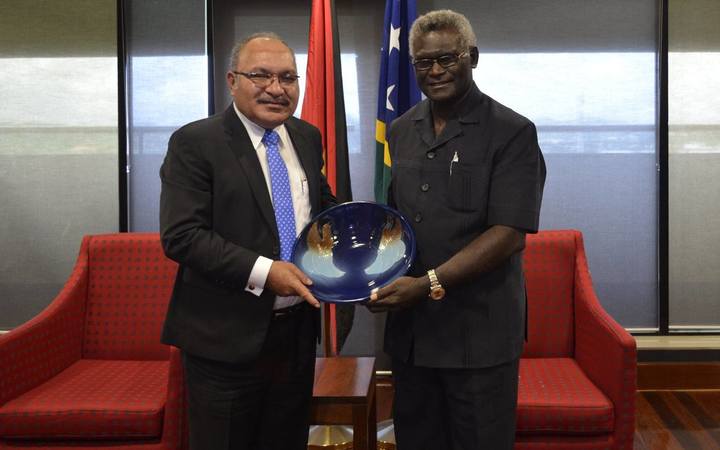 Mr Sogavare, who is also Solomon Islands' prime minister, met with his PNG counterpart Peter O'Neill in the last leg of his consultations with MSG leaders.

It's his second and final such tour since taking up the chairmanship of the sub-regional grouping in 2015.

Regarding West Papua, the Chair confirmed with Mr O'Neill that an application for full MSG membership by the United Liberation Movement of West Papua would be dealt with under revised MSG Membership criteria.

A special MSG committee on Legal and Institutional Issues had made recommendations on membership guidelines to be used in the long-pending decision on the Liberation Movement's application.

But Mr Sogavare had not confirmed when MSG leaders are expected to convene a summit to deliberate on this, suggesting more delays in the process.

According to a release from Mr Sogavare, Mr O'Neill expressed that "the ULMWP's membership of the MSG is not an issue to PNG, but rather the ULMWP proving that it is a united body that represents the collective views of the people of West Papua just as the FLNKS is evidently a united body representing the collective views of the Kanaks of New Caledonia."

The FLNKS is one of five full members of the MSG along with independent states PNG, Solomon Islands, Fiji and Vanuatu.

With its country's own growing role in the MSG as an associate member status, Jakarta has opposed the Liberation Movement having membership at the MSG, saying West papuans are already covered through Indonesian membership.

Meanwhile on the issue of MSG Labour Mobility, the MSG Chair said Prime Minister O'Neill has expressed desire to see this opened up so that Melanesians from other Melanesian countries do not have to apply for work permit to work in PNG and vice versa.

The MSG's press release on the Port Moresby talks are here.