Indonesian police have released more details about the arrests of 106 West Papuans at the weekend in Sorong. 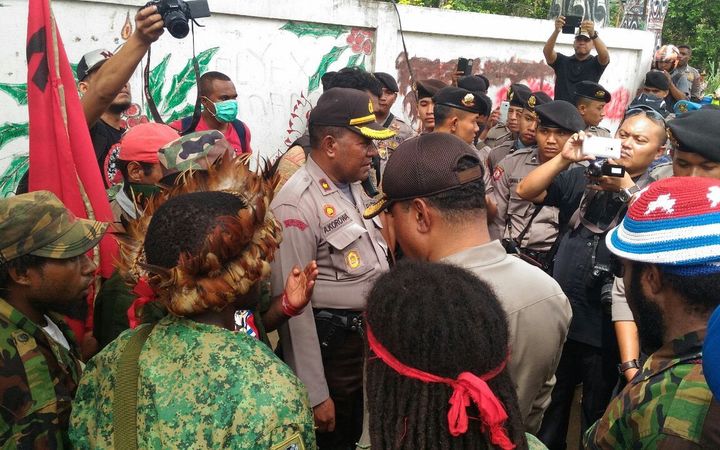 Indonesian police talk to members of the West Papua National Committee, or KNPB, in Jayapura during their demonstration, 31 May 2016. Photo: Tabloid Jubi

Police have confirmed they made the arrests in the West Papuan city at a prayer event held by the West Papua National Committee, or KNPB, to celebrate their eighth anniversary.

The police disbursed the assembled KNPB crowd, accusing them of separatism as the congregation yelled their demand for West Papuan independence.

All but seven of the 106 taken to the main Sorong police station were soon released.

The Jakarta Post reported the KNPB as saying police accused the seven of treason and provocation.

The Sorong Police chief Edfrie Maith however said they only detained seven Papuans for 24 hours in order to question them, in compliance with standard procedure.

A public interest lawyer with Papua Itu Kita, Veronica Koman, said the seven were released but have been told to report to the police daily.

Chief Edfrie said the police ordered the event to disperse because in the event notification letter from the KNPB, the organisation used a symbol that was not an Indonesian symbol.

He explained that the KNPB did not properly acknowledge the Republic of Indonesia, therefore their event was not permitted to proceed.

Ms Koman said the KNPB produced a notification letter about the event using the KNPB logo, which was standard procedure for any other organisation.

She called the police action "an attempt to muffle freedom of expression in Papua".

Meanwhile, the newspaper reported that the Sorong police chief had been criticised for trying to forge a deal with local journalists not to publish the story.

Gema Demokrasi, a Jakarta-based network of 75 civil society organizations, said Mr Edfrie's attempt was a violation of the 1945 Constitution on freedom of expression.