Vanuatu's parliament is to convene for an extraordinary session later this month. 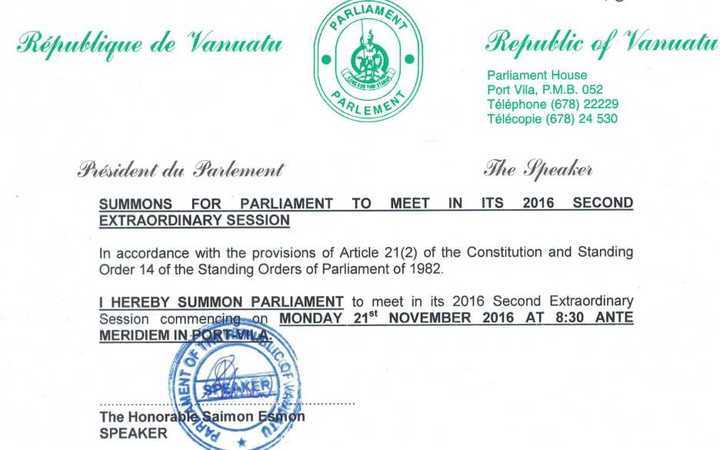 Vanuatu's speaker of parliament Saimon Esmon issued a summons for an extraordinary session to commence on Monday 21st of November. Photo: Vanuatu government

The speaker Saimon Esmon has issued a summons for the session to commence on Monday 21 November.

The summons for the second extraordinary session of 2016 lists eleven bills to be considered by MPs.

There are also amendments to the Penal Code, the Citizenship and Immigration Acts.

As well as the legislation, MPs will debate a motion on the terms of reference for the Ad Hoc Committee for the Bill for the Constitution.

The committee is to review and oversee consultation on a raft of proposed changes to Vanuatu's constitution.

Among the proposed changes are provisions to stop MPs crossing the floor of parliament for personal gain and reforms on motions of no-confidence.

The changes, which also include plans for reserved parliamentary seats for women, are part of the Charlot Salwai-led government's central policy of political reform.