Samoa is using this week's Commonwealth Weightlifting Championships in Malaysia as an opportunity to qualify their first batch of lifters for the 2018 Games on the Gold Coast.

Don Opeloge, the nephew of Ele, Mary and Niusila Opeloge, is competing in the men's 77kg division in Penang. 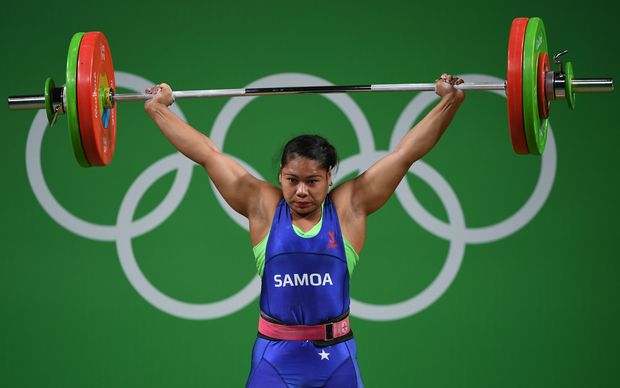 Mary Opeloge, pictured here at the Rio Olyumpics, has opted to skip the Commonwealth Championships in Malaysia to rest. Photo: AFP

Samoa Weightlifting head coach Jerry Wallwork said all four could seal their spot on the Gold Coast this weekend.

"Our super heavyweight man, he's a young boy but he's currently ranked number one (in the Commonwealth)," he said.

"Our super heavyweight woman, she's been lifting for a while and she's currently ranked number one and the 105kg men is in contention with David Katoatau from Kiribati - the Commonwealth (gold) medallist so they're going to fight it out for the gold and silver," he said.

We've got a very good team and I'm hoping that three of them can qualify here."

Jerry Wallwork said some of their top lifters, including Rio Olympians Nevo Ioane and Mary Opeloge, have opted to skip the Commonwealth Champs to rest up or recover from injury.

He said there will be further opportunities to qualify for the Commonwealth Games in 2017.

Meanwhile three Kazakh weightlifters have been stripped of the gold medals they won at the 2012 London Olympics after failing doping tests in the re-analysis of samples.

They were among eight athletes disqualified from the Games today as part of the IOC's re-testing of samples.

The results mean Papua New Guinea's Dika Toua will improve to a 12th place finish in the women's 53kg event, while Fiji's Maria Liku is now the fifth best finisher in the women's 63kg division.