The Human Rights Law Centre in Australia said continuing violent attacks against refugees on Manus Island demonstrated Australia's offshore detention centres must close and people detained there should be brought to safety in Australia.

On Saturday, a Somali refugee, Masoud Ali Shiekhi, was set upon by a group of locals with rocks in an unprovoked attack near the transit centre at East Lorengau.

The Director of Legal Advocacy at the Human Rights Law Centre, Daniel Webb, said Mr Ali Sheiki had tried to integrate with the Manus Island community by volunteering with a local organisation supporting people with disabilities.

He said Mr Ali Sheiki had studied the local language and had tried to make local friends.

Mr Webb said on a recent trip to Manus he saw the aftermath of a similar attack on two refugees who were attacked by a group of seven locals.

He said they were beaten with an iron bar and robbed.

Mr Webb said the only humane way forward for Manus Island refugees was for the Australian government to bring them to Australia and allow them to rebuild their lives in safety. 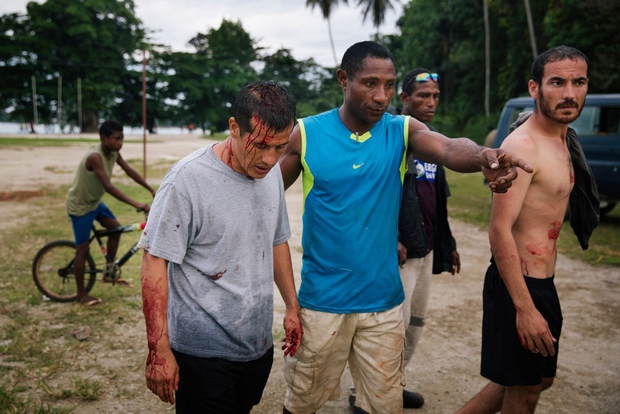 In this handout picture taken on August 10, 2016 and released on August 15 by GETUP, two injured Afghan refugees (R and 2nd L) from the Manus Island detention centre are being helped after allegedly being attacked by a group of Papua New Guinean men whilst out on a day release. Photo: Matthew Abbott / GETUP / AFP