An opposition MP at risk of suspension from Fiji's parliament has made a formal apology in the legislature.

Ratu Isoa Tikoca was yesterday referred to parliament's Privileges Committee after a complaint against him by Fiji's Prime Minister Frank Bainimarama.

The Privileges Committee met yesterday to deliberate on the complaint but is yet to table its report.

Ratu Isoa rose at the opening of parliament this morning to issue the apology.

He asked for forgiveness if he had hurt MPs or the people of Fiji.

Fiji VIllage reported Mr Bainimarama filed the matter of privilege over Ratu Isoa's comments in parliament in July during debate on the national budget.

At the time Ratu Isoa read out a list of names of people he said were appointed to their government positions because of their Muslim faith.

Another opposition MP Tupou Draunidalo was suspended in June over apparently calling the Education Minister a fool. 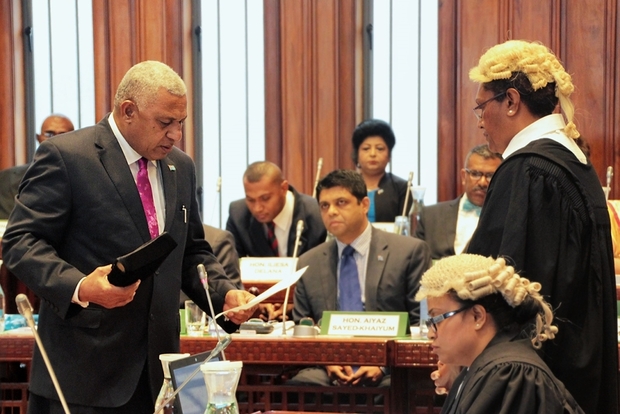 Fiji's Prime Minister, Frank Bainimarama, taking the oath of office at the first sitting of the country's parliament in September 2014 Photo: Fiji Department of Information