Three spots at Netball's World Youth Cup are up for grabs at this week's Oceania qualifiers in Auckland.

Fiji and Samoa represented the Pacific at the last Championship in Glasgow three years ago, with one added berth on offer for 2017.

Former Samoa international Lee Edwards has taken charge of the country's Under 21 team and is excited by what she's seen.

"Quite a dark horse - I think people will be quite surprised that the talent that's out there for the 21s, especially also we've got three local girls from Samoa in the team," she said. 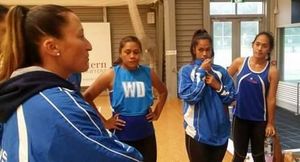 The Samoa Under 21 netball team trains ahead of the Oceania World Youth Cup Qualifiers in Auckland. Photo: Facebook/Netball Samoa

"The difference in their level of skill today from the last probably four years is huge, so that goes to show the amount of work Netball Samoa is putting in in the islands with the grassroots netball and just developing a lot of their players there.

"Looking over the next eight years it's very exciting. The majority of these girls - we've got a couple of 15 and 16 year olds - are all quite young. If they're willing and able we'll have them around for the next 8-10 years and see where that gets Netball Samoa in our rankings.

"Definitely our goal is to actually win the tournament - I think we've got the team to do that - and then obviously eye on the prize in Botswana, getting over there and playing the best in the world."

Papua New Guinea are the first team on court on Monday in a friendly hit-out against a local selection side, before Fiji take on Tonga and Samoa face Cook Islands in the opening round.