Most of the population on the remote atoll of Takuu, also known as Mortlock, in Papua New Guinea's Bougainville region are said to have resettled in Buka town. 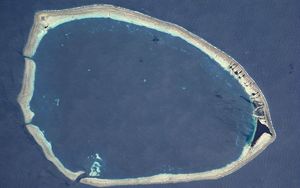 From a population of at least 600 ten years ago, only around 50 people remain on Takuu, according to an indigenous Mortlock Islander.

She says due to the lack of education and health services, many people feel they must leave Takuu.

But climate change is also a factor: Takuu, like other outliers in the region, has been steadily impacted by rising sea levels and declining food crops.

Ms Tefuarani says the unique culture and traditions of this Polynesian outlier are observed faithfully by its people.

"But if everyone starts moving, then we have to worry. It's the old people that are keeping everything safe for us, like our traditions and whatever at home that we have.

They're the ones who are looking after everything. But I do understand why people have decided to move."

The Autonomous Bougainville Government assisted Takuu people, also known as Mortlock Islanders, to be able to rent a small piece of land in Buka town.

Ms Tefuarani said it saddened her to see her people living away from their home island, and struggling to maintain their custom traditions.

However, she said the situation could be different if Takuu had more government assistance, and access to services such as shipping and education.