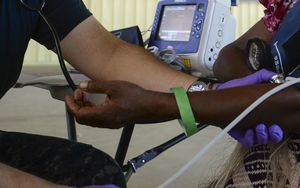 At least three more doctors and 14 more nurses are said to be needed at Helena Goldie Hospital. Photo: Supplied

Founded in 1903 by Methodist missionaries, the Helena Goldie Hospital at Munda in the Western Province has only one full-time doctor for a coverage area of 30,000 people.

It is run by the United Church of Solomon Islands with some support from government, overseas church partners and individual donors.

The church employs all of the hospital's nursing staff, who provide healthcare at the hospital and its 15 community clinics, as well as lecture at the local nursing college.

Helena Goldie's Medical Superintendent Richard Hapa is the only full-time doctor and he says at least three more doctors and 14 nurses are needed.

"For example our outpatient daily service it is only up till four o'clock in the afternoon because of not enough staff. And even in the wards there is only two registered nurses and then maybe three to four nurse aids which is not enough, really enough to take care of a 68 bed hospital."

Dr Richard Hapa said the government had previously offered 10 established nursing positions but these were being offered to key church funded staff to try and retain them.

He said this was because the government salary package was more lucrative than that provided by the church, but also because there was a staff housing shortage that needed to be addressed.

Urgent requests for additional doctors for the hospital however have yet to be replied to.

According to the World Health Organisations 2012 Health Service Delivery Profile, Solomon Islands is classified as one of 57 countries deemed to have a critical shortage of health workers.

As well as limited numbers, there was also a heavy bias in workforce distribution with approximately 24 percent of the total health workforce based in the National Referral Hospital.

That included more than 73 percent of doctors, 33 percent of nurses and all of the country's specialists.