There are hopes in Papua New Guinea that Australia will follow Singapore and co-operate with efforts to stem the laundering of proceeds from corruption in PNG. 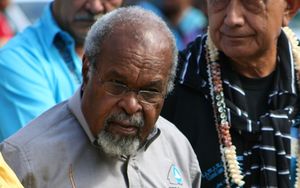 A Singapore court last week jailed a couple for laundering $US3.6 million of funds, intended for setting up community colleges in PNG.

The court established that in 2010 almost $US800,000 of the funds was deposited in the bank account of Sir Michael Somare, PNG's prime minister at the time.

The chairman of PNG's anti-corruption agency Taskforce Sweep, Sam Koim, said his team had been working with Singaporean authorities on the case.

He said co-operation from other jurisdictions could be critical to successful prosecution of corruption.

Mr Koim said many of PNG's white collar criminals tended to buy property, or hold their money, in Australia.

"I would not want to think that there is no suspicious transaction that has not been detected by AUSTRAC (Australian Transaction Reports and Analysis Centre). I believe there are many and it's up to Australia to have the political will to actually take a step like what Singapore did."

Mr Koim said the conclusion of the Singapore case would assist his team in finalising its own line of investigations on the matter.

Sir Michael has apologised for the shame caused to his country, however in a statement said that at no time in his political career had he received bribes.