Police in Fiji say they have not received any reports in relation to the hacking of a prominent website. 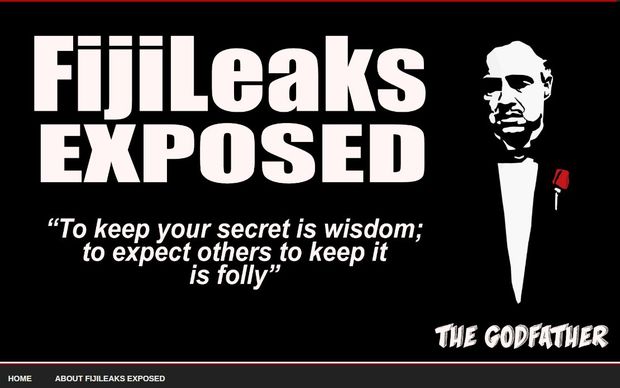 FijiLeaks has featured high-profile leaks and broken key stories on corruption in politics and business in Fiji, with its editor, Victor Lal, living in self-imposed exile in the United Kingdom.

The site was down for days but had recently republished files that detail how private email correspondence between Mr Lal and others in Fiji was hacked and posted on a recently-published website.

The "FijiLeaks Exposed" site said it was dedicated to exposing the contributors to FijiLeaks, calling them "traitors".

While there was no one taking responsibility for the hacking on that site, a Facebook page entitled "Kishore Kumar Publication" features a man called Kishore Kumar admitting to the hacking and declaring a "cyber war" on who he sees as dissidents of Fiji's Government.

"It is my delight or delights me to hack into anti-government networks," and "Hacking is illegal but when you spread bullshit news about the government, we have a reason to compensate hacking your system," he said.

Victor Lal had confirmed that his laptop was hacked, and he was locked out of three different email addresses, as well as his personal Facebook page. 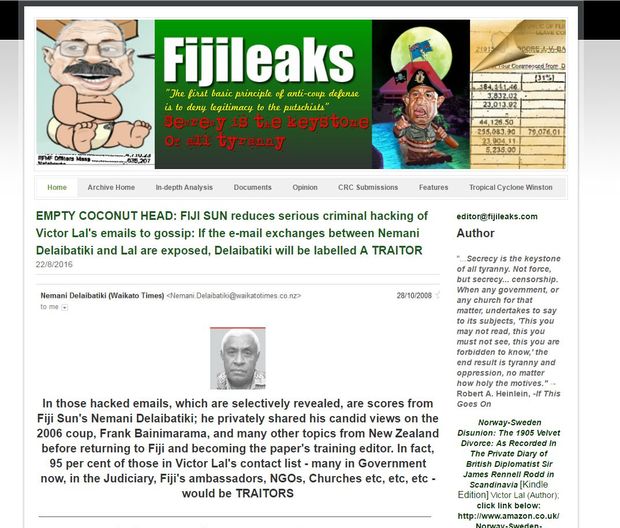 The Fiji police spokesperson, Ana Naisoro, said there have not been any complaints in relation to the hacking.

However the FijiLeaks site said the British Cybercrime Unit as well as email hosts may investigate.

Kishore Kumar's Facebook page also features an attack on journalist Graham Davis, who had worked for the Fiji Government's Ministry of Information, and whose private emails to Victor Lal were published on FijiLeaks Exposed. 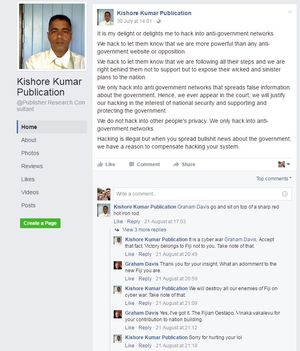 Mr Davis had posted a comment on the page, saying the exchanges with Mr Lal were innocuous and Fiji is not North Korea. He said he could talk to whoever he liked.

However Mr Kumar branded him a "snake" and vowed to "destroy all enemies of Fiji."

The FijiLeaks Exposed site also features photos of a young female in a bikini, with what seems to be an extortion attempt against Mr Lal. There was a request for a naked photo of the woman, assumed to be a relation of Mr Lal's, in exchange for 'letting him go'.

The recently-published site also singles out two other prominent Fijians who may have had some contact with Victor Lal in the past.

The site threatens Vijay Narayan, the news director of Communications Fiji Ltd, which publishes Fiji Village and broadcasts a range of radio stations, as well as the prominent businesswoman Mere Samisoni.

It threatens to "expose" Mr Narayan if he does not stop emailing Mr Lal.

Mr Narayan could not respond in time to questions about the website.

It refers to a business deal that Mr Lal appears to have had with Ms Samisoni and also threatens her not to have anything more to do with Mr Lal.

Ms Samisoni declined to comment on the threats but said there needed to be some clarification around the laws of cyberspace, so that people understood that hacking is a criminal offence.

Mr Lal, who has suspended publishing to allow the British Cybercrime Unit as well as his email hosts to investigate the hacking, published a number of emails and photos of text messages that appear to implicate the prominent Fiji businessman Jay Dayal.

Mr Dayal said he does not know and has never met Mr Kumar and has had no recent dealings with Mr Lal.

Mr Kumar, who claims to run a not-for-profit research unit in Fiji, said that he had provided assistance to the Ministry of Defence and the Ministry of Education as well as political parties.

He said he had pledged 6,000 hours of "social media support" for the Government's Fiji First Party, in the lead up to the 2018 elections.

"We will justify our hacking in the interest of national security and supporting and protecting the government," he said on the Facebook page if he should go to court for his actions.