A life in limbo on a tiny Micronesian island is over for most of a boatload of Nepalese and Indian men who were likely duped by human traffickers.

The men arrived near-starving on the island state of Yap, north of Papua New Guinea, and spent a year and a half detained on the docks as the authorities worked out what to do with them.

The authorities could not establish where the 34 men were heading but they believe it was probably Hawaii, Guam or Australia.

For eighteen months the men were not allowed to leave Yap's wharf area and when their boat sank they ended up living in a traditional hut on the docks, on food and other handouts from the government, charities and locals. 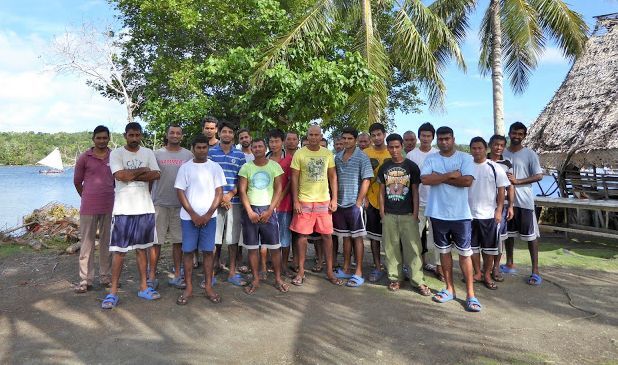 Some of the 34 Nepalese and asylum seekers who lived on Yap for 18 months. All but four have been repatriated. Photo: Rosemary Duda

But that conflicted with the immigration laws of the Federated States of Micronesia.

"I don't think that the situation was handled very well particularly after there was a restriction on even visitation to the men so there were no sort of checks and balances to ensure whether or not the men were provided with adequate food, what their shelter situation was like, if they needed access to medical care. The fact that they didn't have visitors strongly contributed to a decline in their mental health," said Ms Bergeron.

Ms Bergeron said Yap was constantly having to ask the national government, which had responsibility for the men, for food and other supplies.

She said the men's detention was also a burden on Yap's under resourced police.

She is hoping for changes to FSM immigration law to ensure better care for such people in future. 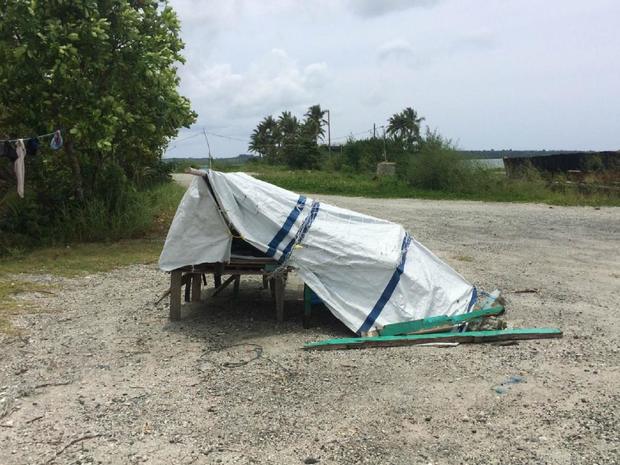 The 34 asylum seekers survived on handouts from the government, charities and Yap locals Photo: Rachelle Bergeron

The UN Refugee Agency, the UNHCR, determined just four of the men to be refugees and the rest were gradually being repatriated to India and Nepal.

Next time we have to make the determination, do we have the resources to support 34 individuals for a year and a half while they are assessed Clayton Lawrence

Clayton Lawrence of the FSM's Department of Justice said the three governments worked together to get the remaining men home.

It was an unusual case for the country, but Mr Lawrence said it was well handled.

"If we took this lightly and we accepted these individuals into the community I think you would see a flood, knowing that they could be integrated into the community and maybe seek whatever they were seeking, whether that's easier access to the United States or other countries or just better economic opportunity in our community," he said. 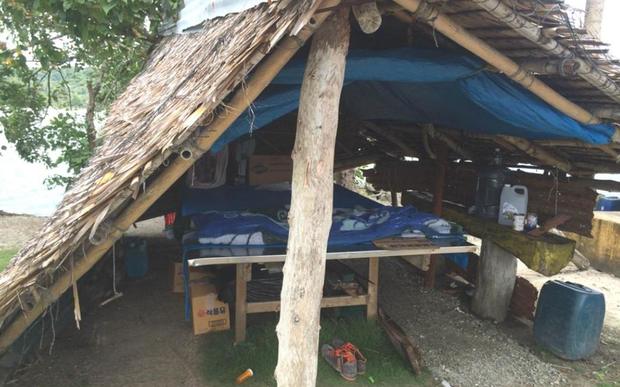 The 34 asylum seekers lived in a traditional hut on the docks of Yap after their boat sank Photo: Rachelle Bergeron

Mr Lawrence said the Federated States of Micronesia was not party to international refugee conventions but it respected the refugee determination process.

But he said looking after 34 men for eighteen months had been a big burden on the government and this raised questions for the future.

"Next time we have to make the determination, do we have the resources to support 34 individuals for a year and a half while they are assessed or do we right away criminally charge them, put them in court, have them plead their case in court and deport them right away? Those are decisions that we have to make moving forward."

A senator in the Yap state legislature Nicholas Figirlaarwon said the men suffered during their time on Yap and it took a long time to get the issue sorted out. 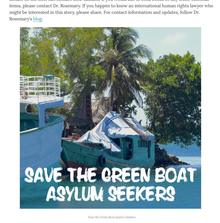 A campaign was launched to help the asylum seekers after they arrived on Yap in November 2014 Photo: http://www.standbysojourners.com/save-the-green-boat-asylum-seekers-yap

He said local customs around welcoming outsiders meant people were embarrassed over their treatment.

"Yap is very small and limited in many ways. It took them so long, the government and the international community to involve in this situation where they can give these people what they need under the law. They also stopped the community from helping them in whatever they can," said Mr Figirlaarwon.

The final group of seventeen Indians are due to be sent home over the next fortnight while the four Nepalese given refugee status await resettlement.