The Tongan community in New Zealand's Bay of Plenty are in shock at the death of five local Tongan kiwifruit workers.

The men were killed after their car was hit by an unladen logging truck as they left work at a Katikati kiwifruit coolstore last night. 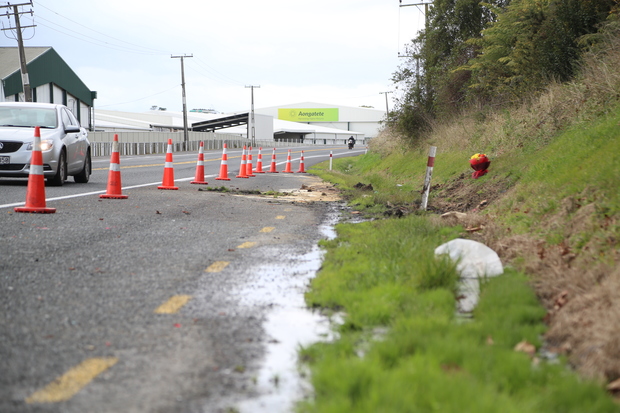 The five men were killed on the stretch of road just outside the Kiwifruit coolstore. Photo: RNZ / Tom Furley

Simione Vakasiuola, who is a church elder in the local Tongan Methodist church in Katikati, says one of the victims was based in New Zealand while the other four were seasonal workers from Tonga.

He says 28-year-old victim Halani Fine was living with him and worked in the coolstore part-time while studying to be a Youth Counsellor.

Also among the victims were father and son Sitiveni and Koli Vaipulu.

Mr Vakasiuola is also a firefighter and arrived at the crash scene on duty last night.

"I don't know. I can't get the picture in my head at the moment but it was a very very sad thing to look at," he said.

"I mean, you look at five people you know, died. And um, how to explain it? I don't know, I can't. It is my job to pull them out and a job that I refused to do last night because I know them."

Under the RSE the workers were insured and this will cover the costs of repatriating the victims' bodies to Tonga.

Apolosi Tu'angalu, who worked with the victims, says the other Tongan workers there want to take them home.

"We are heartbroken at what has happened. We really feel the loss of our colleagues," he explained.

"We met this morning and we've all decided we want to return together with our colleagues who died. We'll just come back next year. We all just feel that we want return together and take them home."