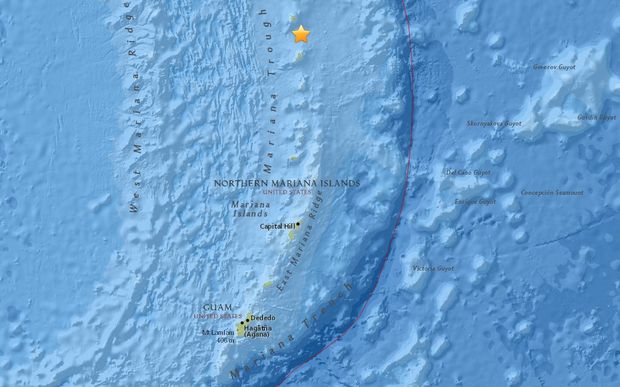 The epicentre of this morning's 7.7 earthquake in the Northern Marianas near the island of Agrihan, north of Saipan and Guam. Photo: US Geological Survey

There have been no reports of injuries or significant damage after a magnitude 7.7 earthquake struck the Northern Marianas this morning.

The earthquake's epicentre was about 30 kilometres south, southeast of the uninhabited island of Agrihan, in the north of the US territory.

It struck at a depth of more than 200 kilometres, which the Pacific Tsunami Warning Centre said was too deep for there to be any risk of a tsunami.

RNZ International's correspondent on the main island Saipan, Mark Rabago, said there had so far been no reports of damage from the sparsely populated northern islands, near the epicentre.

But he said on Saipan, the early morning quake sent everyone running out into the streets.

"All of Saipan I think is awake. It lingered for a while, I think close to a minute," he said. "You wake up and then you ran, ran as fast as you can out of the house to safety, and then you also see frightened and early awoken neighbours with you in the street."