Four men have been arrested in Solomon Islands and a gun has been seized after an incident in Malaita Province late last week.

The men, one of whom was allegedly brandishing the gun, threatened construction workers at the Taba'a bridge in North Malaita.

Police Commissioner Frank Prendergast also praised the operation by the Honiara-based Police Response Team, saying it was carried out without assistance from the RAMSI Participating Police Force.

The Regional Assistance Mission was called on, in the past, when firearms were involved, as local police have been unarmed since the ethnic tensions in 2003.

Mr Prendergast said the successful arrests showed the capability of the Solomon Islands police and were proof that it had the support of the wider community.

He said it also showed it was ready to take on the full responsibility for national security when RAMSI departs next June.

"That has been resolved by the RSIPF without PPF assistance. Weapons have been recovered, people are in custody and I think that is just a visible sign that the RSIPF is ready to police," said Mr Prendergast. 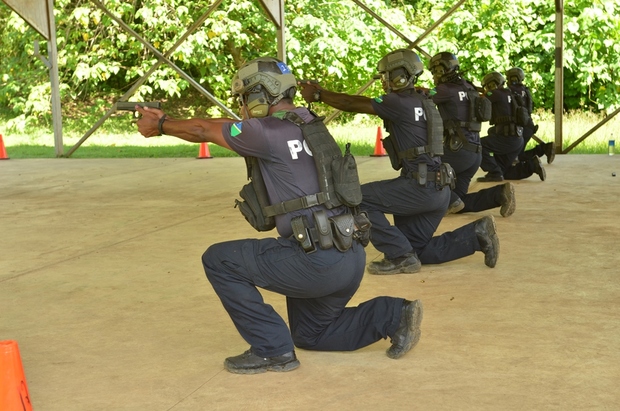 After a bloody ethnic conflict which lasted from 1998 to 2003, thousands of registered and unregistered firearms, including high-powered assault rifles taken from police armouries, were seized and destroyed by RAMSI.

Solomon Islands was then declared gun free however an unknown number of high-powered firearms still exist in the communty.

The Royal Solomon Islands Police Force was also stripped of its arms, although there is an ongoing programme involving weapons training, while a new multi-million dollar armoury has been opened.

Specialist units like the police riot squad and airport police are being trained in the use of arms.