A Papua New Guinea Treasury source has revealed that the government has ordered a payment of US$900,000 to each government MP at the so-called 'Alotau retreat'.

Writing on the PNG Attitude website, the journalist Peter Kinjap reported a source, who wished to remain anonymous, saying the Finance Department had been instructed to make payments ahead of tomorrow's vote of no-confidence in Prime Minister Peter O'Neill.

MPs who converged for the talks in Alotau and committed to support Mr O'Neill were in line for the payments, which were to be provided under the District Services Improvement Programme (DSIP).

DSIP funds are allocated for each MP's district on an annual basis, but so far this year delivery of district funds has been impeded amid PNG's public finance woes.

However, Finance Secretary Ken Ngangan confirmed with national broadcaster NBC that the instrument to facilitate payments had been signed and funds were expected to be released tomorrow. 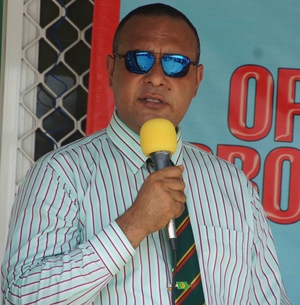 The opposition MP Sam Basil said MPs in Alotau indicated the Prime Minister had told them that the opposition had held up DSIP fund disbursement by seeking court action.

Mr Basil denied the opposition was trying to block DSIP payments, but said the cheques were a form of bribery by the prime minister and he doubted they would be honoured.

"If they ever receive the cheques tomorrow, well, good luck if we have money in the account. Because there's only one intention, to lure the numbers to them, their side [government].

"As soon as they step off the plane tomorrow or this afternoon, they will hand them the cheques, which means they do not have enough time to run to the banks to deposit them and get them cleared."

Mr Basil said the funds should normally be paid to district treasurers, not directly to MPs. "The members have been forced to act that way in terms of getting payments cheques for their districts, which belongs to their districts, against the votes that they will give."

He doubted the cheques would be honoured, he said. "It's more of an enticement by the government, which is against the conscience of every thinking member."