The New Zealand Prime Minister has discussed human rights in West Papua and New Zealand's opposition to the death penalty during formal talks with the Indonesian leadership.

John Key is on his final day of a two-day trip to Indonesia.

West Papua is tightly guarded by Indonesian military and police, and reports of killings and human rights abuses against the local population have been commonplace in the past few decades.

Mr Key said President Joko Widodo and his officials raised the issue of human rights and West Papua before he did.

He said the Indonesian government clearly wanted to be more open about such matters.

"They did raise the point quite specifically about human rights and said, look, if there are specific issues with human rights, then they take up the issues, they investigate them and they make sure that they are not repeated.

"He seemed to be quite keen to have greater transparency so that there can be greater understanding." 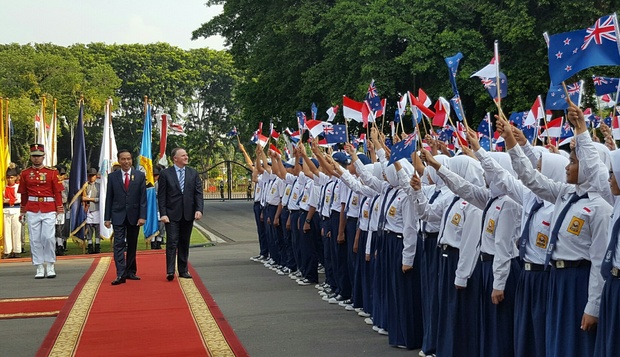 Mr Key said he told the Indonesian leadership that New Zealand was firmly against the use of the death penalty.

After his meeting he was asked by reporters whether he raised any individual cases with President Widodo.

"From time to time there are really sensitive issues that I raise with other leaders, and I do that on the basis of making sure that I attempt to make the situation better, not worse if there is an individual involved.

"In my experience if I then go and discuss those issues, I then run the risk of making things worse not better."