On July 2, 1966 the calm of French Polynesia's Mururoa atoll was shattered by an explosion of unbelievable force. Within a second, the azure tropical sky flashed bright orange, and was ruptured by a towering radioactive cloud that mushroomed into the atmosphere; the placid lagoon was stirred into a tempestuous cauldron, while the coconut trees on the white sand islets were bent by the sheer force of the nuclear explosion.

"It's beautiful," said President Charles de Gaulle at the sight of the first of France's 193 nuclear tests in the South Pacific. But for French Polynesia and many of its people, the fallout from decades of nuclear weapons testing is still being dealt with 50 years after the first test.

The explosion from a French nuclear test at Mururoa in French Polynesia. France conducted 193 tests between 1966 and 1996. Photo: AFP

France first tested a nuclear weapon in what was then French Algeria in 1960, but as that country gained independence, Paris looked to its remote ocean territory and sealed off two uninhabited atolls in the Tuamotu group, Mururoa and Fangataufa.

Winiki Sage, the president of the Economic, Social and Cultural Committee of French Polynesia, said that 20 years after it was humiliated in World War II, and as the Cold War was nearing its most dangerous heights, France sought the assurance of its own nuclear deterrence.

Mr Sage said that when the territory was proposed as a test site, there was some protest from within the French Polynesian assembly and members of the community, but that was overruled and many were convinced that the testing would be safe, and that a massive military build-up would bring economic benefits.

"We didn't understand what was happening," he said. "A lot of Tahitians and Polynesians went to France for the war. And, when Mr de Gaulle came here and said 'we're going to do some tests,' no one could imagine it was going to be so bad for us."

"All the Tahitians were led to believe that it would be safe," said Mr Sage. "I can tell you that in the house of my grandmother there was a nice picture of a big nuclear bomb test, and everybody was thinking it was something nice. We didn't really know that it was something bad for us."

In 1962, the agency responsible for nuclear testing, Direction des Centres d'Experimentation Nucleaires (DIRCEN), oversaw the construction of observation posts, support bases, and other infrastructure for the programme, ahead of the first detonation in 1966 - a plutonium fission bomb code named Aldebaran, which was dropped from a helium balloon.

From that day, France would conduct regular tests on the atoll, where some of the explosions were 200 times the strength of the bombs dropped by the United States on the Japanese cities of Hiroshima and Nagasaki in 1945.

But Mr Sage said the programme and its intentions was shrouded in secrecy, and little information was provided about the possible effects of radiation to the thousands of people who worked there, often with little more protection than shorts and t-shirts, on boats as little as 15 kilometres away from the test site. The main island, Tahiti, more than 1,000km away, is also thought to have experienced radiological impacts.

"Thousands of people - thousands of Polynesian people - worked over there. All these people, some were living in remote islands, all left to work for the Army," said Mr Sage. "A lot of people who were there, they were working, they were eating, they were fishing. Nobody understood that it was very, very bad."

After only a few years, the tests grew more controversial. The United States, Britain and the Soviet Union had abandoned nuclear testing in 1963, but the French pushed on until the mid-1970s, when it moved to regular underground testing on the fragile atolls.

This was to the ire of environmental groups, and the atolls became the scene of regular protest flotillas. In 1973, the New Zealand government deployed two naval frigates to the site in protest. France reacted strongly, sending commandos to board and seize protest ships.

A moratorium was eventually placed on nuclear testing, but that was lifted by president Jacques Chirac in 1995 so France could try out a new warhead for submarines, a decision that was deplored by Australia, New Zealand, Japan, other Pacific countries, and many of France's European allies. In French Polynesia, the decision angered many Tahitians, and riots in the capital, Papeete, caused millions of dollars worth of damage and saw the airport terminal burned down. Mr Chirac ended nuclear testing in the Pacific in 1996. 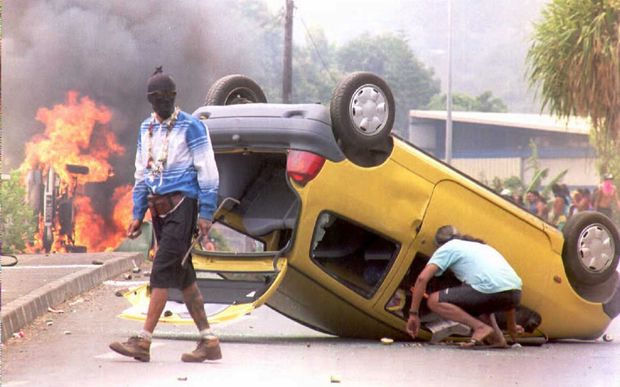 In 1995, the announcement by France that it would resume nuclear testing in French Polynesia sparked the Tahiti riots. They caused millions of dollars worth of damage. Photo: AFP

For years, the French Defence Ministry insisted that the tests caused no environmental damage and that the health of workers was not put at risk. But Richard Tuheiava, a member of the French Polynesian Assembly, said the effects were clear.

The environmental impact, too, appears to have been worse than previously conceded by France. The soil around the atoll remains highly radioactive, and there are fears that the atolls have been weakened by the blasts and could collapse, triggering a tidal wave.

Despite the mounting evidence, the French government denied all suggestion that the nuclear tests were harmful to health until 2009, when it introduced a programme to give compensation to victims of radiation exposure. Of more than 1,000 claims, only 19 people have ever received compensation.

Mr Serge said the French government still had a lot to explain about its activities. "We want to take out the taboo on this subject and we want that everybody can talk transparently, we know that the French state and the Army have to explain to us today what happened exactly during these 50 years. The battle is not finished," he said.

In 2014, Mr Tuheiava spearheaded a motion to ask France for close to US$1 billion compensation for environmental damage; the continued occupation of Mururoa and Fangataufa, which remain no-go zones; and to foot the bill for ongoing healthcare. 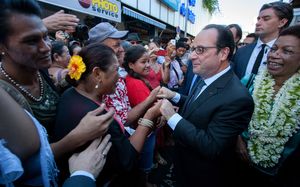 When he visited Tahiti in February, François Hollande spoke of the need to "turn the page on the issue of nuclear testing." Photo: AFP

In a promising development in February this year, President François Hollande visited Tahiti - the first presidential visit since 1979 - and spoke of the need to "turn the page on the issue of nuclear testing."

"I recognize that the nuclear tests that took place between 1966 and 1996 in French Polynesia had an impact on the environment, and caused a plethora of health issues among its populace," said Mr Hollande, who pledged to fund the upgrade of the oncology department at the Tahiti hospital.

He also promised to revisit the way compensation claims were being treated, and expand financial support to those who had suffered health complications because of radiation.

But, the president of the Nuclear Workers' Association, Mururoa e Tatou, Roland Oldham, said little had come of that, and the people were fast tiring of broken and unfulfilled promises from Paris.

"I think we have been too kind. They cannot carry on like this with the people," said Mr Oldham. "After a while people are going to have enough of all these promises."

"We cannot give up this battle - we cannot. We're doing this because it's the duty of any man, anywhere in the world, to do what we are doing." 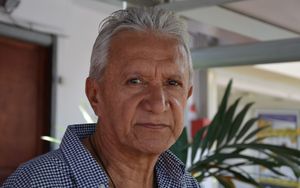 50 years after the first nuclear test on Mururoa, French Polynesians are still fighting for recognition of the effects of nuclear testing. On Tahiti, the anniversary was marked by protest marches and ceremonies to commemorate the anniversary. In Papeete, an exhibition was opened to tell the story of what the programme was, and the atomic aura it has left over the territory, Mr Sage said.

The fight is far from over. Richard Tuheiava said he had doubts that Mr Hollande, a deeply unpopular president who faces an election next year amidst turmoil in Europe, would ever fulfill his promise to the 280,000 people of French Polynesia.

Mr Tuheiava has in recent weeks taken the case to the United Nations: "[We're] exposing and introducing this case to various ambassadors. It might be hard within the next few years it might be hard for the colonial power to remain silent, to believe that we will forget it."