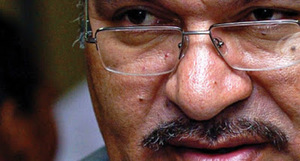 Papua New Guinea's Prime Minister, Peter O'Neill, has again blamed the opposition for protests at the country's universities, saying the opposition leader, Don Polye, has blood on his hands.

One student has been killed, buildings have been set on fire, and students have been shot at by police in unrest at PNG's three main universities over recent weeks.

Students across the country have been boycotting classes in protest at Mr O'Neill's refusal to stand down from office to face fraud allegations.

But in a statement, Mr O'Neill accused Mr Polye and the opposition of attempting to use student issues for political gain.

He said the opposition has been stirring up students and misleading them with false ideas, and that when investigations were completed, he wouldn't be surprised to find the opposition heavily involved.

Mr O'Neill said the opposition was undermining the economy and image of the nation.

The Papua New Guinea cabinet was to meet today to consider the National Security Council's report on university campus violence.

In the most recent incident a first year student was murdered at Unitech in Lae at the weekend.

The chief secretary to government, Isaac Lupari, said the council was recommending a curfew be imposed immediately at the University of PNG in Port Moresby and at Unitech to support police efforts to restore law and order.

Unitech said it already has a curfew in place

The council said the police should be able to call on PNG Defence Force assistance if needed.