All four teams remain in contention going into today's final round of matches at the OFC Under 20 Championship Preliminary tournament.

After a 1-1 draw against Tonga and 1-0 victory over Samoa, Cook Islands have destiny in their hands.

Tuka Tisam's side can seal top spot with a win against American Samoa at the Loto-Tonga Soka Centre in Nuku'alofa however the coach was keen to play down his side's chances.

"I wouldn't say that we are the favourites to progress, this is still a very tight contest and I think it's very much up in the air," he told OFC Media.

"We need a win against American Samoa and it won't be easy I think it will be another close and physical match and we can't afford to get ahead of ourselves." 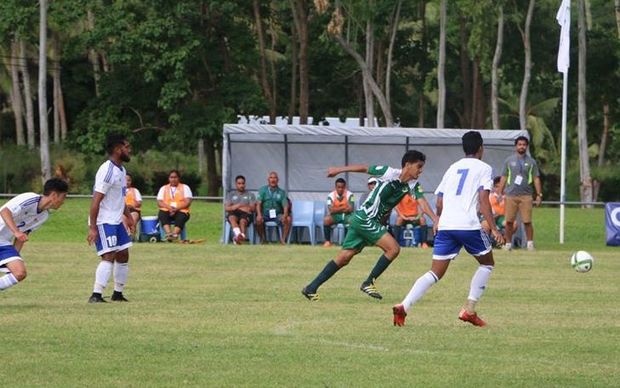 American Samoa need to win by nine goals and hope second-placed Samoa are held to a draw against Tonga.

Despite not having the odds in their favour, Sione Mau was adamant his side have plenty to play for.

"Our aim is to improve in every game we play and we want to win our final match. We lost our first game, drew the second and I'm confident we can do one better the third time around," he said.

"We will treat this match against Cook Islands as a must win game for us."

The final match between Samoa and Tonga could become a dead rubber depending on what happens between Cook Islands and American Samoa.

A draw would be enough for Samoa if the Cook Islands fail to secure maximum points but coach Paul Ualesi was staying realistic about his side's chances.

"It's going to be tough for us to qualify because we need the other result to go our way. But we are still within a chance, so we will prepare hard and try our best because you never know," he said.

"It won't be easy against Tonga, it's a home game for them and they will try just as hard."

Coach Tevita said his side's primary focus is to win.

"If we want to qualify for the next stage we must beat Samoa. We have to prepare with that goal in our mind," he said.

"But regardless what happens in the previous match we will treat it as do-or-die final and we will do our best to win."

The overall winner will claim the final spot in September's OFC Under 20 Championship in Vanuatu.