The Papua New Guinea Prime Minister Peter O'Neill has met with the President of France Francois Hollande in Paris. 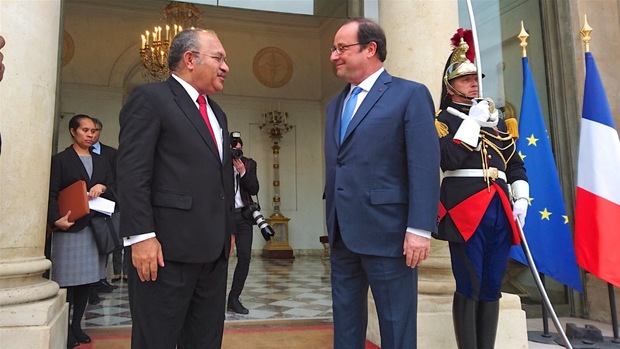 It was the first ever formal bilateral meeting between leaders of the two countries, and comes at a time when, according to Mr O'Neill, trade and cultural relations are increasing.

Currently, PNG exports canned tuna duty free to France and is seeking to expand to other areas including agriculture, forestry, and minerals.

Mr O'Neill said that France is increasingly seen as PNG's trade gateway to Europe and that his country would like to become a significant hub for France in the Pacific.

A French company is presently making a major investment in PNG.

French multinational, Total SA, is to be the lead developer of the Elk-Antelope Liquefied Natural Gas project in PNG, which the O'Neill government hopes will underwrite significant new economic activity.

The Papua LNG Project is going to generate 10,000 jobs in Port Moresby and 3,000 new jobs in Gulf Province, and hundreds of French workers will come and live with us," Mr O'Neill enthused.

Meanwhile, during the meeting the French President reaffirmed the importance of human rights to his PNG counterpart.