More than 1,000 West Papuans participating in a demonstration calling for independence in Indonesia's Papua region were briefly detained on Wednesday. 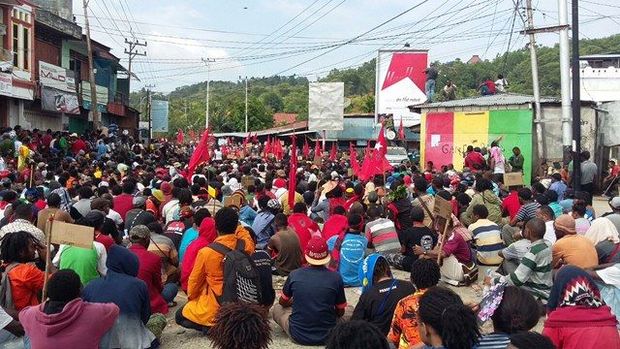 A large peaceful demonstration in Jayapura in support of the United Liberation Movement for West Papua in May. Photo: Tabloid Jubi

The protesters took to the streets in Sentani, near Papua's provincial capital Jayapura, to demand that an independent body conduct human rights investigations rather than the Indonesian government.

The demonstrators have called for an internationally monitored referendum for independence.

The march, which came ahead of a visit to papua by a top security official to look into claims of human rights violations, is the latest in a series of large pro-independence rallies since April.

Media reports say the demonstrators were detained for protesting without a permit.

Papua police spokesman Patridge Renwarin said police localised the demonstrators to limit their movements. He added no one was arrested.

The police action was backed by Atmadji Sumarkdijo, an aide of Chief Security Minister Luhut Pandjaitan, who is set to visit the province today.

Last month, more than 2,000 Papuan activists were detained for participating in a large peaceful demonstration on the anniversary of Dutch New Guinea's 1963 integration into Indonesia.

Papua has been gripped by a long-running and often violent separatist conflict since it was incorporated into Indonesia after a widely-criticised UN-backed referendum in 1969. Dutch colonial rule ended in 1963.