The Opposition in Fiji has called on New Zealand to harden up on the Fiji government because it says it's operating under a democratic facade.

The opposition leader Ro Teimumu Kepa presented the Prime Minister John Key with a submission outlining her concerns during his trip to Suva last week.

She also apologised for the welcome speech by the Fijian prime minister Frank Bainimarama, in which he lashed out at the New Zealand media and defended his 2006 coup.

In her submission to Mr Key, Ro Teimumu said New Zealand should withhold support for Fiji in its bid for a seat on the UN Human Rights Council and the Presidency of the UN General Assembly.

But Mr Key later said New Zealand would support the bid by Fiji's ambassador to the UN Peter Thomson, who was elected today.

Ro Teimumu held a brief meeting with Mr Key after his formal talks with the Prime Minister, Frank Bainimarama.

In her submission she said Mr Bainimarama's FijiFirst government was intent on establishing a parliamentary dictatorship, by manipulating parliamentary processes and clamping down on media freedom.

"There is no longer any question about the intentions of this regime, they are focused on entrenching themselves behind the facade of a new democratic framework that the international community regrettably seems eager to to commend and embrace, despite knowing the realities on the ground," she said.

"While it has been suggested that this is a period of transitioning to democracy, the cold reality is that transition is actually the militarisation of all key positions within the civil service structure, the appointment of the government's financial backers and key players on the boards of our democratic institutions that are supposed to be independent and accountable."

She said the government had also abused its power by removing opposition MPs from parliament and the opposition's nominee from the chairmanship of a key committee which scrutinises public accounts. 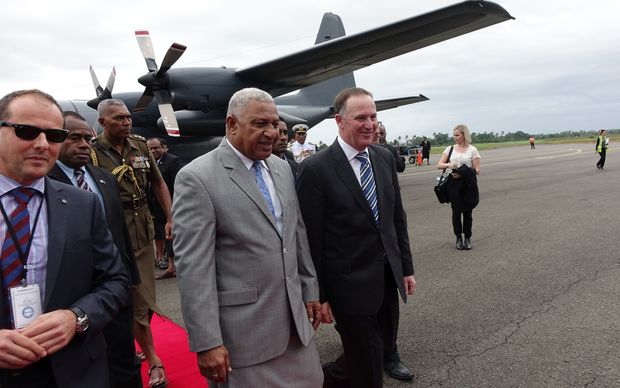 Ro Teimumu said the opposition was most concerned about the Media Industry Decree which she said compromised the media.

"The government spends huge sums of money on their social engineering of citizens, through a daily barrage of media orchestrated projects, managed by (the Washington-based public relations company) Qorvis," she said in the submission.

"Self-censorship is widespread, even the Fiji Times gets legal clearance on every article printed."

"With the imposition of the media decree and related acts of intimidation and threats, convincing people to stand up for democracy becomes extremely difficult. Which is why we need ANZAC to use its influence on the regime to help change the direction in which Fiji is heading by insisting that the government operates by the minimum standards of accountability practiced in New Zealand and Australia," she said.

Mr Key said it would continue to help democracy evolve in Fiji as soon as possible.

"As I said to the Leader of the Opposition, fundamentally, at the core of it, while New Zealand can understand some of those issues and we seek to understand them better and give support, we are here to try and help both the government and the opposition," he said.

"People come to New Zealand for training and for support and those kinds of things and we'll continue to try and behave in that way where we can try and allow this democracy, which I think is evolving, to evolve at a faster pace and to the highest standard possible."

In his earlier welcome speech Mr Bainimarama told Mr Key genuine democracy had been introduced to Fiji, not the "sham democracy" that existed before.

"Ten years ago, some Fijians were more equal than others. Their votes carried more weight than others. They enjoyed a range of privileges that others didn't share - such as special access to jobs and to education." he said.

He called on the New Zealand government to work with Fiji to strengthen its democracy and resilience to climate change.

"We are not New Zealand. We have different challenges and priorities. We are not the New Zealand democracy. Evolved and robust. We are the Fijian democracy. Finally genuine yet still in its relative infancy and with institutions that need to be strengthened," said Mr Bainimarama.