The trauma of being shot at by police on Wednesday is likely to mean students at the University of Papua New Guinea will stay away from campus in the near future. 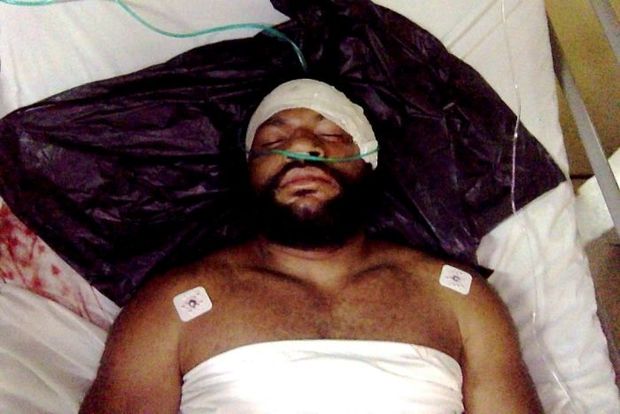 Stephen Lichas was chased and shot by Papua New Guinea police when he fled the University of PNG's Waigani Campus after they opened fire on hundreds of students Photo: Supplied

Police opened fire on unarmed students at the Waigani campus and its vicinity after they tried to march to parliament in a show of support for a planned vote of no-confidence against Prime Minister Peter O'Neill.

As many as 23 people, mostly students, were hospitalised with injuries, including four who are in a critical but stable condition.

The University subsequently obtained a court order which disallows students from taking any protest action.

They had been boycotting classes since early May, demanding that Mr O'Neill stand aside to face fraud allegations.

The president of the Students Representative Council, Kenneth Rapa, said the student body will continue to abide by the rules.

But he explained that, with police remaining on the Waigani campus, students were fearful.

"If the police can go right into the campus and shoot them, it's unsafe for them to stay in the campus anymore," he said, "so most of the students have left the campus already."

"After what has happened on Wednesday, how could you expect the students to go back to class right after they've been traumatised and some students have been hospitalised?"

Mr Rapa, who understands police have been seeking his arrest, said the Council will leave it to students to decide as individuals whether they want to return to class.

The prime minister meanwhile has announced that there will be an inquiry into the unrest, although he described it as being about seeking to uncover external influences driving student protests of the last five weeks.

A similar inquiry established by the Police Commissioner Gary Baki would also look into sources of support for protesting students, as well as the conduct of Mr Rapa.

The Students Representative Council denies that it has been funded or manipulated by any outside sources.

While some government MPs have expressed regret about students being injured, the government has not condemned the police actions in shooting unarmed civillians.

In one case, two of the students hospitalised appear to have been shot by police in pursuit several kilometres away from the campus.