The New Zealand Prime Minister's visit to Suva over the next two days is being welcomed by people in Fiji.

John Key will meet his Fijian counterpart Frank Bainimarama tomorrow during the first visit by a New Zealand leader since before the coup in 2006.

The deputy leader of the opposition in Fiji, Biman Prasad, said the visit was a chance for Fijians to press home their country was not out of dictatorship yet.

"They will see this visit as an opportunity for Fiji and New Zealand to strengthen their ties but they will also be looking at the messages to this government that they cannot continue to muzzle the opposition, they cannot continue with the dictatorship that they have continued with over the last two years." 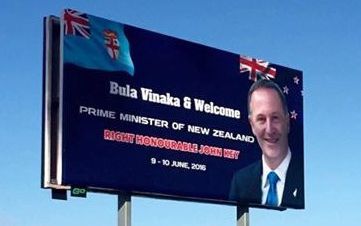 Businesses working between New Zealand and Fiji are applauding the New Zealand prime minister's trip to Fiji this week.

The President of the New Zealand Fiji Business Council Chandar Sen said frosty relations between the two countries in the past had not helped business links and Mr Key's visit would mean more opportunities.

"This is the last piece I guess in the puzzle, the jigsaw puzzle, it's been a long time coming. We applaud Mr Key's keenness to go and melt the ice away."

"It opens up more opportunities for our businesses with these sort of government grants, aid, trade, now opening up fully," he said.

"By going there blindly supporting Bainimarama and (Attorney General Aiyaz Sayed) Khaiyum, in the long-term it is only going to encourage them to behave in the manner they have been behaving in since the elections so I'm not happy and quite disappointed. I only hope John Key will raise these things with the Fijian government", he said.