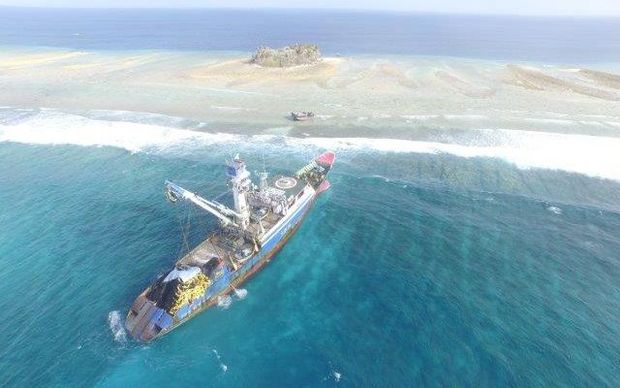 A large Taiwanese fishing vessel was successfully pulled off a reef in the Marshall Islands capital, Majuro, late on Friday, over a week after it ran aground.

The 80.6 metre purse seiner, Fong Seong 666, ran aground on a northern reef of Majuro Atoll overnight on Thursday 12 May as it was waiting for daylight to enter the nearby pass. Initial efforts to pull the boat off the reef were unsuccessful and were complicated both by the 100 tonnes of fish on board and low tides.

"About 3:30pm Majuro time Friday, we completed the rescue of the purse seiner Fong Seong 666 and its skiff," said Pacific International Inc's CEO Jerry Kramer. "In the marine world this was a very significant feat."

The Majuro-based company employed tugboats and salvage experts to remove the vessel from the coral reef where it was lodged for over seven days. "It wasn't just a matter of yanking the boat off the reef," said Mr Kramer. "There were a bunch of preparatory steps that had to be taken to cause the least damage to ship, protect the crew, save the cargo, and limit environmental damage." 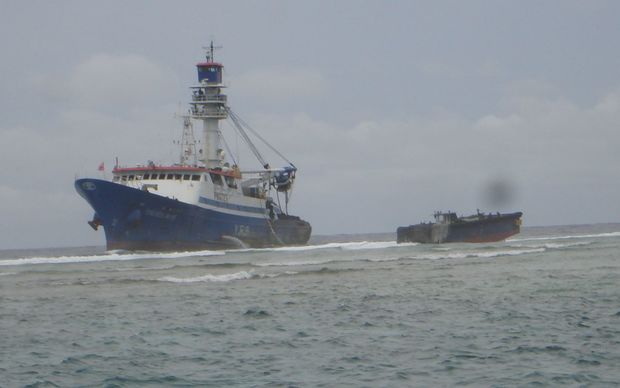 The Taiwan purse seiner Fong Seong 666 had been stuck since May 12 on a reef in Majuro Atoll, Marshall Islands. Photo: Matt Holly

Rescue work was initially planned for Wednesday, but representatives of the Kaohsiung, Taiwan-based Fong Hong Fishery Co Ltd asked to delay it until week's end so a company official could fly in to the Marshall Islands to be onsite for rescue efforts.

The Fong Seong 666, a Vanuatu-registered vessel, was returning to Majuro to transship its cargo of skipjack tuna to a waiting carrier vessel. At today's world market prices for skipjack tuna, the Fong Seong's 100-ton cargo was worth at least US$160,000.

Over 300,000 tonnes of tuna is transshipped annually in Port Majuro, making it the busiest fish transshipment point in the western Pacific island region.

Majuro Atoll Local Government Police Sheriff Will Lathrop said it is suspected either an untrained crewman was at the helm or someone fell asleep, causing the Fong Seong 666 to ground. Vessel officials told first responders they were waiting for daylight to enter the Majuro pass when the grounding occurred. Mr Lathrop said they did not detect any leakage and the hull appeared to be intact.

Mr Kramer said it was obvious from the pre-rescue communications with ship owners, insurance agents and off-island salvage experts that they were "surprised at our capability." But, he added, "We have a professional staff and have accomplished this several times. We have a 100 percent success record (with getting boats off the reef)."

The Majuro-based company's marine salvage and rescue expertise is an essential service that gives vessel owners additional confidence in using this western Pacific nation as a port of call, Mr Kramer said.