The lawyer representing hundreds of asylum seekers on Papua New Guinea's Manus Island will this week seek a court order to make Australia legally liable for those at the detention centre.

Last week, the Supreme Court declared the detention on Australia's behalf of asylum seekers on Manus Island unconstitutional, and the government later announced that the centre would close.

Ben Lomai - who represented many of those detained on Manus Island - said he would be seeking to make the Commonwealth of Australia a defendant in the asylum seekers' challenge to their detention.

He said that if successful, and if the Supreme Court ruled in their favour, they would have to be released back into Australia's care as their first port of entry.

"In any case we say that, look, the arrangement has been nullified which means that all the parties will have to go back to the drawing board. In this case, the asylum seekers must be returned back to the first port of entry."

He said he would ask the Supreme Court to skip a full hearing and go straight to assessing the case for compensation.

"The rights of the asylum seekers were breached, and the arrangement between Australia and the Papua New Guinea government as per the MOU was unconstitutional. A lot of these issues have now been resolved and so we'll be putting to the court that there is not to resolve at this stage, in terms of liability."

Ben Lomai said, if successful, the Australian and PNG governments could be liable for more than one billion dollars in compensation payments.

An expert in Australian foreign aid says hundreds of millions of dollars promised to Papua New Guinea for hosting the centre is unlikely to be threatened.

The head of the Development Policy Centre at the Australian National University, Stephen Howes, says most of the US$340 million promised to PNG for hosting the centre is yet to be spent.

He said it was unclear what implications the centre's closure would have for that money, but it was unlikely that Australia would cancel the aid package.

"It remains to be seen what the position of the Australian government will be. But you've got to think, given the way that Australia's reacted, given their determination that these asylum seekers and refugees should remain in PNG, they will need the cooperation of the PNG in some form or other, so you would think it really wouldn't be in Australia's interests to start withdrawing that aid."

Officials from both countries are due to meet early this week to work out what to do next.

Australia's prime minister and immigration minister have both said the asylum seekers will not go to Australia under any circumstance. 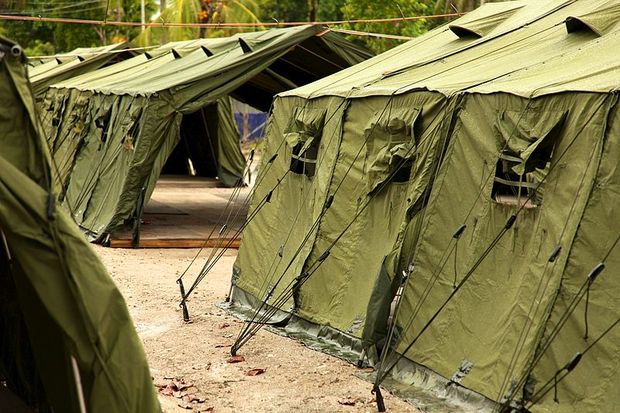 The detention centre on Manus Island was found to be unconstitutional by PNG's Supreme Court. Photo: Free google search image