Pacific Oceania remain upbeat despite failing in their bid to earn promotion in the Fed Cup tennis competition.

The composite team finished sixth out of 12 teams in Asia/Oceania Zone Group Two in Thailand, one place lower than a year ago.

They mixed wins over Iran and Bahrain in their group with defeats to Hong Kong and the Philippines, before losing the fifth place playoff against Indonesia.

Team Captain Patrice Cotti said it was a difficult group that was ultimately decided by a couple of rubbers that could have gone either way.

"The level this year was really better. For me it was a good result: we finished third in our group because Philippines finished first and Hong Kong China third of the tournament. These two teams were really really good and we lost only 2-1 against these two teams - we lost only on the deciding doubles - so we were very close to be qualified for the final."

Patrice Cotti said if Samoa's Steffi Carruthers hadn't been affected by a back injury during the decisive doubles tie against the Phillipines things could have been different.

"I'm really happy with them because they played their first games in the Fed Cup and they had four games to play - two in doubles and two in singles - and they only lost one game for Mayka in singles and Ayana didn't lose a game. For them it was a really good experience and I'm really happy to have them in the team. They are really good persons and they are now a good part of the team."

Patrice Cotti said he expects all four players to be available for selection again next year. 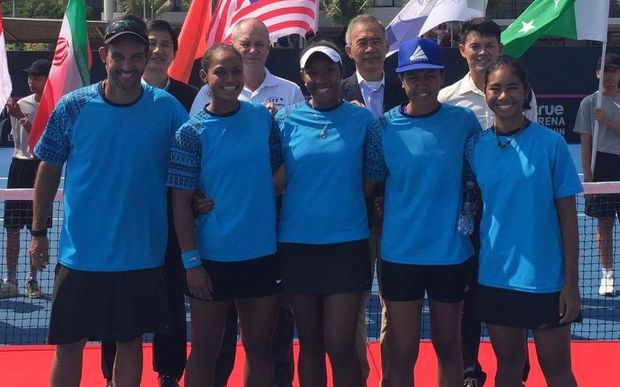