Tropical Cyclone Amos was upgraded to a category three on Friday night, and was forecast to pass close to Samoa's southern coast this weekend. 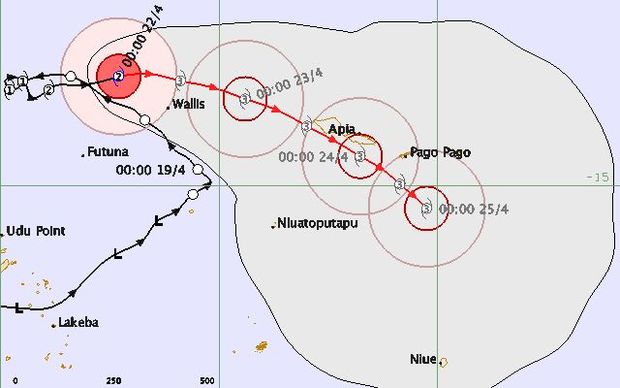 The cyclone is still more than 600km west of the capital, Apia, slowly moving east at 16km/h.

On Friday night, Samoa's Meteorological Service upgraded the system to a category three storm, with sustained winds as high as 140 km/h at its centre.

It said the system was intensifying, and was expected to pass close to the country's southern coast late on Saturday and early on Sunday morning.

It had already issued heavy rain, strong wind, and flood warnings for the country, and small boats were advised not to go out into very rough seas.

The system was already bringing heavy rain and strong winds as it passed close to Wallis Island. The public there were advised to prepare, with schools closed on Friday and a 'yellow alert' declared by authorities in the French territory.

To the east, authorities in American Samoa placed the territory under 'hurricane watch', with Amos expected to enter its waters on Sunday.

A meteorologist at the National Weather Service in Pago Pago, Mase Akapo Akapo, said Amos was expected to pass to the territory's south, and there was the potential for severe damage.

Mase said residents should not take chances and prepare for strong winds, heavy rain and flooding.

"The system is coming from the west side, and if it passes to the south of us the strongest winds of the system will be right over us," he said.