Papua New Guinea's police commissioner on Sunday confirmed the suspension of senior members of the anti-corruption unit, accusing them of undermining his authority and of being corrupt themselves.

The unit's director, Matthew Damaru, was on Saturday suspended for 21-days, alongside Timothy Gitua and other senior members.

In a six-page statement released on Sunday evening, the commissioner, Gari Baki, said the timing of the suspensions had nothing to do with the arrests. 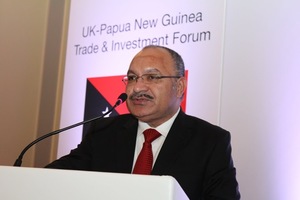 "These actions are independent and purely administrative in nature and has nothing to do with the current turn of events undertaken by the NFACD and should not be taken out of context," said Mr Baki, who accused Mr Damaru, Mr Gitua and other leaders of undermining his authority for the past year.

"Damaru and his team's modus operandi was to do investigations covertly and run to the courts to obtain arrest warrants in direct contradiction to set police practice and procedures," he said.

"As Commissioner of Police I was not given any brief by Damaru and his team since assuming office in June 2015 although I had requested Damaru to provide a list and detailed brief of all major investigations currently in court as well as investigations pending."

Mr Baki said he only learned of this week's high-profile arrests through the media, which he considered an act of insubordination in total defiance of his office.

"The established practice and procedure is that all high profile cases are briefed up through the chain of command and ultimately to the office of the Commissioner," he said.

Mr Baki also alleged that the unit was itself involved in large scale corruption, saying he had evidence that officers received large cash payments to carry out investigations in Eastern Highlands and Simbu provinces.

"For the Eastern Highlands the Provincial Executive Council approved more than K1.5 (US$480,000) for fraud squad officers to investigate the Provincial Administrator that was appointed by the National Government. I have evidence that each of the police fraud investigators allegedly received a substantial amount of cash each," he said.

"Allegations of bribery have also been made in the Simbu investigations which is currently being investigated."

Chief Superintendent Hodges Ette and Chief Inspector Jacob Ivaroa have been appointed as acting directors of the National Fraud and Anti-Corruption Directorate.

Mr Damaru did not answer phone calls on Sunday.