The long-running saga surrounding Paraka lawyers in Papua New Guinea took yet another twist on Monday, this time engulfing a Supreme Court judge and the lawyer representing the Prime Minister, Peter O'Neill.

An arrest warrant was issued for Peter O'Neill over two years ago in relation to his role in allegedly illegal state payments of around US$30 million to the firm, Paraka Lawyers. However, both Mr O'Neill and his finance minister, James Marape, have so far been able to avoid arrest through an array of legal challenges and stay proceedings.

On Monday, Mr O'Neill's lawyer, Tiffany Twivey, was arrested by members of the police anti-fraud and corruption unit as she arrived at Port Moresby's Jacksons Airport on a flight from Brisbane. 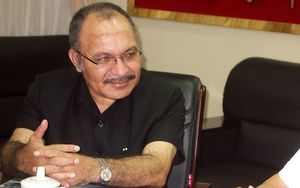 The unit's head, Mathew Damaru, said Ms Twivey had been questioned and was charged with one count of attempting to pervert the course of justice before being released on bail.

That charge related to a court proceeding to set aside an arrest warrant for the Treasury Secretary, Dairi Vele, without notifying the complainant, the National Fraud Squad.

Ms Twivey told the Post Courier the charge was ridiculous and had been manufactured by the fraud squad.

Her arrest came several hours after a Supreme Court judge, Bernard Sakora, was charged with judicial corruption relating to payments he allegedly recieved from a company owned by a lawyer at the centre of the payments to Paraka lawyers.

In a brief statement, Mr Damaru said Mr Sakora failed to declare his interest in the case, and presided over a number of Supreme Court cases involving Paraka Lawyers, including those involving Mr O'Neill's arrest warrant.

He, too, denies the charges and was released on bail.

Monday's arrests add yet another dimension to the long and convoluted corruption saga surrounding Paraka lawyers that has engulfed many members of the public and political elite.

When the arrest warrant issue came to a head in 2014, the prime minister moved to dismantle the anti-corruption body, Taskforce Sweep, from whose investigations the warrant stemmed.

He also replaced the Attorney-General and Police Commissioner.

But the fallout has been hard to suppress, with the new Attorney-General charged with perverting the course of justice, and the replacement police commissioner sentenced to jail for obstructing the arrest warrant on Peter O'Neill.