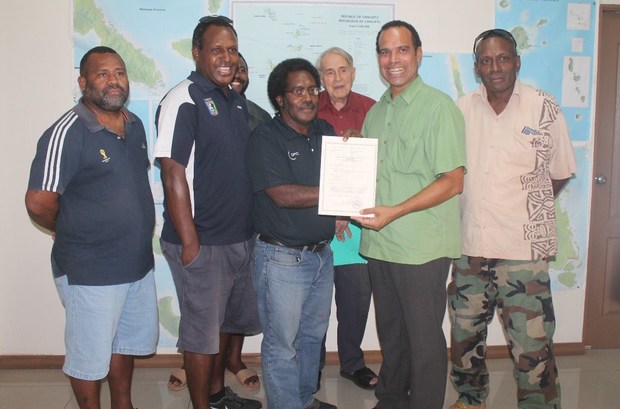 Vanuatu's Minister of Lands Ralph Regenvanu (green shirt) hands over the first negotiator's certificate to be issued for a lease application for rural customary land, to the Vanuatu Football Federation. Photo: Supplied

Vanuatu's Minister of Lands Ralph Regenvanu has handed over the first negotiator's certificate to be issued for a lease application for rural customary land.

The certificates, which have been established under new land laws, give the green light for potential leasee to negotiate with customary landowners on the terms of a lease agreement.

Mr Regenvanu handed over the first such certificate to the Vanuatu Football Federation for development of a futsal field along with an existing football field at Paunganisu, north Efate.

"So they applied to the Land Management Planning Committee, and the Shefa Provincial government council, which is the local authority responsible for that area as well as all the government departments that were relevant, all agreed that it was possible to do a lease for that purpose," said Mr Regenvanu.

"Then the Custom Land Management office went down to the village, found out that the land was in dispute, that there were four parties already in court disputing the land. It consulted each of the four parties and they all agreed that they have no problem with this lease going ahead."

Ralph Regenvanu said the VFF would now go and meet with the four landowning parties to seek agreement as to the terms of a lease, before forwarding back to the Lands department for registering the lease.

This certificate was one of three certificates issued late last week for applications to lease rural customary land.

The other two were for residential leases at Matantapua and Pango.

The government has a stated aim of seeing 15 negotiation certificates issued within its first 100 days in office.

Mr Regenvanu helped establish the system when Lands Minister in the Joe Natuman-led government but it was delayed after Cyclone Pam hit Vanuatu.

"So for a whole six months we suspended the implementation of these new laws to focus on relief to the population," he said.

"And then midway through last year, the former minister of lands Paul Telukluk came in (replacing Regenvanu in the role for a stint) and announced that he was giong to repeal all the laws and so he stopped implementation for another six months until the election."

Ralph Regenvanu said that now his Graon mo Jastis Pati, along with the Vanua'aku Pati among others, were back in power, the land reforms were finally being rolled out as originally intended.