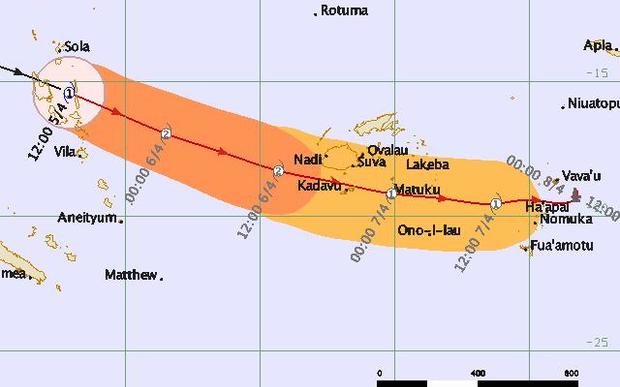 A tropical cyclone alert is now in force for parts of Fiji.

Cyclone Zena is currently a category 1 cyclone, but Fiji Metservice said that is soon expected to intensify into a category 2.

A gale warning is in force for the Mamanuca group, Viti Levu, Kadavu and nearby smaller islands.

At midnight, tropical cyclone Zena was located about 1050km west-northwest of Nadi, moving east southeast at 28 km/h. It is estimated to have momentary gusts of up to 100 km/hr.

By midday, the cyclone is expected to be located about 640km west of Nadi.

Fiji Metservice said the centre of the cyclone was expected to remain over water.

More than 3500 people are sheltering in evacuation centres and one man has died and a woman is missing after 24 hours of heavy rain.

Many Fijians are still in leaky makeshift accommodation after their homes were badly damaged by Cyclone Winston six weeks ago.

There are also fears that the heavy rain and flooding in Fiji will heighten the risk of disease in remote villages.

The Red Cross has been assessing sanitation and water supplies and said many village toilets and water systems were ruined by the cyclone , forcing people to go to the toilet in the open, which in turn polluted the rivers and streams.

The United Nations Office for the Coordination of Humanitarian Affairs had reported an estimated 250,000 people needed help with water, sanitation and hygiene after Cyclone Winston.

63,000 people have received such assistance so far.