A Vietnamese fisherman who allegedly killed a vessel officer will go on trial in the Marshall Islands in early May for murder. 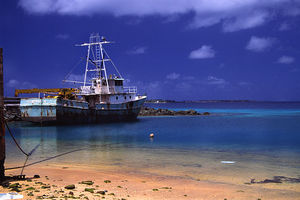 A ship anchored in the Marshall Islands Photo: RNZI

The man, Dinh Tam Luu, is charged with murdering a Chinese chief engineer from the United States-flagged purse seine fishing vessel Sea Trader while it was anchored in Majuro lagoon to transship tuna.

The case is scheduled to go to trial before the Marshall Islands High Court on May 9.

The vessel, which both the defendant, Mr Luu, and the victim, Ji Bin Liu, worked on, has been allowed to go out fishing but is required to be back in port in time for the trial.

The killing occurred on February the 10th when all US-flagged vessels had been stuck in port for weeks after they defaulted on a fishing agreement with the Forum Fisheries Agency.

The murder happened during a melee involving Vietnamese crew from the Sea Trader and other purse seiners that were in Majuro on February 10. Fishermen from other vessels went to aid their Vietnamese friends on the Sea Trader after hostilities erupted between the Vietnamese crew members and higher ranking Chinese on board the fishing boat, said police investigators.

The dispute developed when chief engineer Ji Bin Liu challenged one of the Vietnamese crewmembers, Xuan Nghi Dang, for bringing Vietnamese fishermen friends from other vessels to drink alcohol on the Sea Trader, according to Criminal Investigation Division Detective Hanton Clarence.

The two crewmembers faced off and Mr Liu slapped Mr Dang, which sparked a brawl that knocked Liu to the deck. Vietnamese crewmembers went to their rooms to get knives. But these were taken away by other Sea Trader crewmembers, Mr Clarence said.

The vessel's fishing master Shen Chang Min and another Chinese crew attempted to calm the situation, telling the Vietnamese they'd call the police if they didn't stop and return to their vessels. As the Vietnamese were leaving the Sea Trader, Mr Liu punched Mr Dang, bloodying his mouth.

After they departed, a few minutes later, a skiff came to Sea Trader from another vessel with 10 Vietnamese crew who were drinking alcohol and by the fishing master's judgment were already drunk, said Mr Clarence. One of the Sea Trader's crew said they were armed with pocketknives and scissors. The fishing master dumped out their drinks and advised them to leave the vessel. But Mr Liu then engaged this group in another argument, and when the group boarded their skiff to leave Sea Trader, Mr Liu would not release it from a winch used to bring it on board even when ordered by the fishing master to do so.

This sparked a blow up between the Vietnamese on the skiff and the Chinese on Sea Trader who started fighting, said Mr Clarence. Mr Luu attacked the second engineer named Gong with a knife. Mr Liu and another crewmember tried to help Gong, but both Mr Liu and Gong ended up stabbed and cut by Mr Luu. Crewmember Jung-Sin Sheng said he was able to push the non-Sea Trader fishermen into the water to quell the fight, and called an ambulance for Mr Liu and Gong. He discovered that Mr Luu was also injured and he was sent to the hospital, too.

Mr Liu died at Majuro hospital after the stabbing.