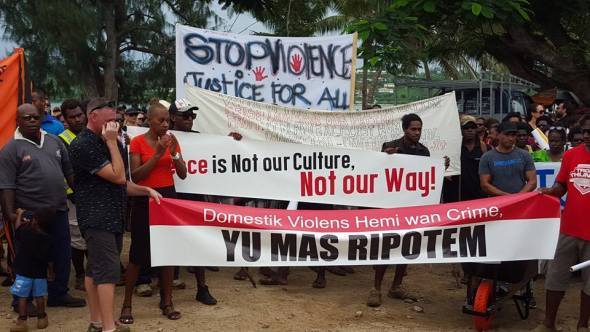 Hundreds march in Port Vila to demand an end to violence against women in Vanuatu. Photo: Mich-McConell-Wilson

In Vanuatu today, several hundred women, men and children marched in Port Vila and Luganville to demand an end to violence against women.

The marches came after tourism industry worker Florence Lengkon was abducted, assaulted and verbally abused for publicly expressing her views about the aggressive behaviour of some bus and taxi drivers at Port Vila's wharf.

The Daily Digest reports that in Port Vila, the protesters marched from the seafront to Parliament House, currently in session, where they were met by MPs from government and opposition.

Earlier, a woman taking part in the protest, Lora Lini, said they hoped the march sent a strong message.

At the parliament, Florence Lengkon presented a petition demanding stronger action against gender-based violence to Minister for Justice Ronald Warsal.

The Parliament subsequently passed a motion to adopt Commonwealth parliamentary procedure and allow the petition to be presented, and in a first for the country, the petition was read out inside Parliament.