Fiji have defended their Las Vegas Sevens title after a stunning comeback victory over Australia in the Cup final.

Australia burst out of the blocks to lead 15-0 at halftime after tries to Sam Myers, Ed Jenkins and Cameron Clark, while Fiji had Vatemo Ravouvou sent to the sin bin.

But in the second half it was a different story as Kitione Taliga scored two length of the field runaway tries in the space of a minute to turn the game on its head.

Vatemo Ravouvou then completed his and Fiji's redemption, combining with captain Osea Kolinisau in the 17th minute to stop Quade Cooper a metre from the try-line.

The ball was stolen and sent wide before Savenaca Rawaca raced away to score and put Fiji in front 21-15, a scoreline they held until the final whistle. 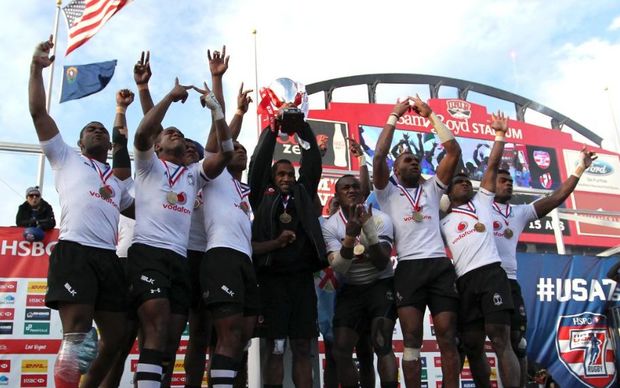 Fiji head coach Ben Ryan spoke before the tournament about the team wanting to put in a performance for the fans back home, following the effects of Cyclone Winston and said he couldn't be more proud of their effort.

"It's been an awful tragic time back in Fiji for the whole population and there's going to be some dark days ahead and I'm glad we can put a smile on the face of all the people back home."

Captain Osea Kolinisau praised Australia's performance in the final and said this result was for everybody back in Fiji.

"We were the first one off the shelves to try and get some smiles back into the people of Fiji. I reminded the boys this week that we needed to play and remember the people back home that were victims of Cyclone Winston and that we needed to give them something to be happy about."

Fiji had earlier been stunned 28-24 by Pacific rivals Samoa on day one, ending a 39 match winning streak in the group stages.

They recovered to edge Argentina by three points before thrashing France 42-12 to finish atop their pool, before beating Japan and United States to reach the final.

Fiji's triumph in Las Vegas puts them five points clear of South Africa in the overall standings, going into this weekend's tournament in Vancouver.

Samoa slipped one spot to 11th overall after finishing in 13th place.

Having stunned Fiji in their first match the Manu went on a three match losing skid against France, Argentina and Scotland before beating Portugal 29-14 and Canada 24-12 to finish with some silverware.

The Manu's preparations had been hampered by a stomach bug early in the week, which confined six players and four staff to bed-rest at various stages, before losing their captain Falemiga Selesele and Tila Mealoi to concussion in the opening two games.

Head coach Damian McGrath said the squad is remaining positive despite a lot of adversity.

"We seem to stagger from one problem to another but the best thing is that the players' resolve is not diminished in any way - they're enjoying what they're doing and we had five brand new players - added to the illness as well it just made that difficult. Beating Fiji in the first game was fantastic - it gave a little show of what we're possibly capable further down the track - and then the calamity of losing our two most experienced players to concussion just really compounded our problems but I was really, really pleased with how our players stuck to their task."

Damian McGrath said both Falemiga Selesele and Tila Mealoi passed their concussion tests and should be fit to play in Canada.

Fiji and Samoa have been drawn in the same pool for the third straight tournament, alongside Kenya and Portugal.