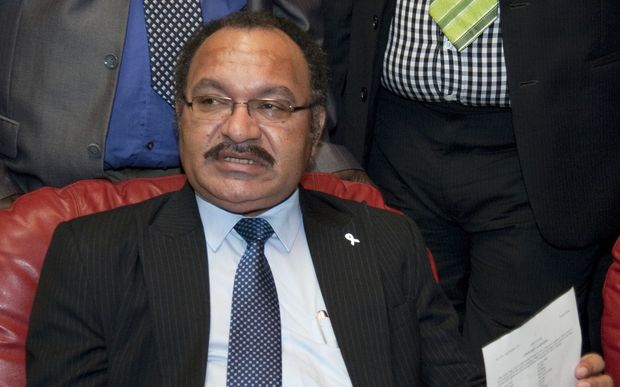 Peter O'Neill has declared he will resign immediately as Papua New Guinea's Prime Minister if evidence shows he has corruptly pocketed just one Kina.

The outstanding warrant relates to allegations Mr O'Neill personally authorised the illegal payment of about $US30 million to law firm Paul Paraka lawyers.

Mr O'Neill said that the legal case was taking its course.

"Show me where I have received one toea (PNG coin) or one Kina (cash currency) and I will resign tomorrow," he told the National Press Club in Canberra on Thursday.

He insisted the lawyer concerned was employed by the previous government.

In 2014, Mr O'Neill responded to the arrest warrant by sacking the PNG police commissioner, firing his attorney-general and suspending numerous other justice department and police officials.

Asked about broader corruption in PNG and the issue of wealthy citizens using Australia as an investment destination like the Cayman Islands, Mr O'Neill said there was a lack of evidence of any wrongdoing.

The PNG Parliament will be debating laws to set up a new anti-corruption body during sittings in March.