The US National Oceanic and Atmospheric Administration said the current event, which started in mid 2014, is being prolonged by global warming and ongoing intense El Niño conditions.

NOAA's Coral Reef Watch Coordinator Mark Eakin is one of a bevy of leading ocean scientists gathered in New Orleans this week to discuss the state of the worlds oceans.

He said coral are not being given any time to recover and the long term effects could be disastrous for marine ecosystems which support the livelihoods of millions of people around the world.

"There is still hope for coral reefs but we need to continue to take strong action to protect them both in terms of the global scale threats like climate change as well as the local threats if we don't we are just not going to have reefs around much longer." 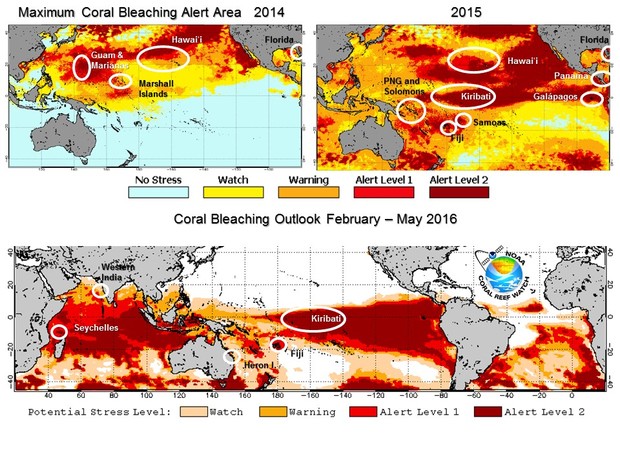 The top images show the maximum thermal stress levels measured by NOAA satellites in 2014 and 2015 along with locations where the worst coral bleaching was reported. The bottom image shows the Four Month Bleaching Outlook for February-May 2016 based on the NOAA Climate Forecast System model along with locations. Photo: Courtesy of NOAA