The new Tokelau ferry "Mataliki" has arrived in Samoa to begin operations. 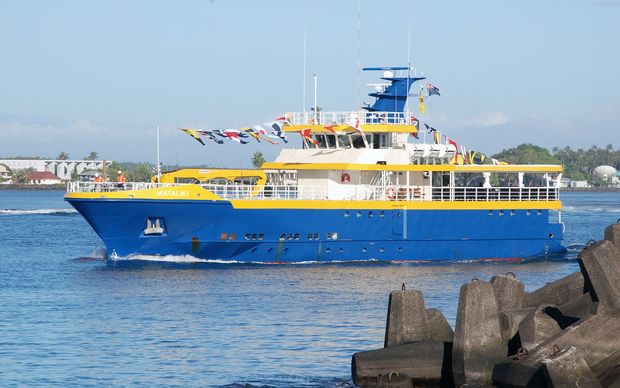 The boat was welcomed at Apia port yesterday by staff of the Tokelau Transport and Support Services Department after making its voyage from ship yards in Bangladesh where it was built.

The UK-designed ship was built at a total cost of almost $US9 million, funded by the New Zealand government.

Mataliki is capable of transporting up to 60 international passengers at a time, and a relatively small amount of cargo for the three Tokelau atolls Atafu, Nukunonu and Fakaofo.

It can carry up to 120 passengers between the atolls.

He described the delivery of the ferry as a dream come true for Tokelau.

Tokelau's population of about 1,400 people is entirely dependent on shipping for people and goods, as there are no flights to and from the islands.

The duration of the trip to Tokelau is still expected to take at least 24 hours for a one-way journey from Apia to the nearest atoll, and four to six hours between the three villages.

Mataliki is intended to continue a fortnightly service between Apia and Tokelau.

Solar panels will be mounted on the rooftop of the passenger deck to help reduce power consumption.

Mataliki's maiden voyage to Tokelau is planned to start on 1 March.

This will be just in time for the General Fono that is due to take place in Fakaofo from 7 to 10 March. The new boat will than also be officially welcomed by the people of Tokelau.