Tonga is hoping Samoa can do them a favour in today's decisive round robin matches at the Oceania Under 17 Women's Football Championship.

The Kingdom had their first win over the weekend, beating their Polynesian rivals 4-1 in Rarotonga. 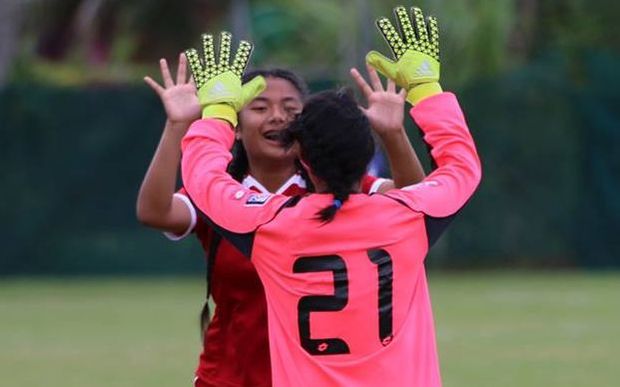 Tonga are hoping for more reasons to celebrate at the Oceania Under 17 Women's Football Championship. Photo: Oceania Football

That lifted them to second in Group A, ahead of New Caledonia on goal difference, and within touching distance of an historic semi final berth.

Head coach Tiane Koaneti knows they will be up against it in their final group match against defending champions New Zealand and accepts they will need a few things to go their way.

"Yeah it will come down to goal difference - we just hope that Samoa will do us a favour when they play against New Caledonia. That's what we pray for that to happen. We do know that New Zealand are technically superior to us and with a bit of island-style footy let's just hope that we will sneak away with the draw".

The Samoa v New Caledonia match will be played simultaneously at a different venue.

In Group B, Papua New Guinea are in the box seat, leading the group with a three-point buffer and a goal difference advantage over Fiji and Vanuatu.

Fiji has a goal difference advantage of seven over their Melanesian rivals but were beaten when the teams clashed at the weekend.

Vanuatu meet a Cook Islands side who have no competition points but pushed PNG in an eventual 2-1 loss.

Coach Tuka Tisam says the game is a chance to restore some pride and give their home fans something to cheer about after back to back defeats.

"There is plenty on the line for the girls still. We have a plan to try and get a result and will focus on our attacking style to try and create some more opportunities on that side of the football."