Cyclone Victor is still causing gale-force winds on Palmerston in the Cook Islands but remains a category three cyclone.

There's an active convergence zone slowly moving around the Cook Islands, with Palmerston to continue to experience winds up to 100 kilometres per hour.

A gale warning remains in place for Palmerston and a strong wind warning for the rest of the Cooks.

On Sunday, or Saturday local Cook Islands time, a Palmerston resident, Will Rowe, said there were fallen fronds and coconuts and the lagoon was boiling like a cauldron.

The executive officer of the Palmerston Island Administration, Arthur Neale, said residents on the north of the island close to the shore had moved to homes further inland.

Arthur Neale said the lagoon was something to behold.

Arthur Neale said incredibly rough seas had already eroded as much as 10 feet of the shoreline in some places. 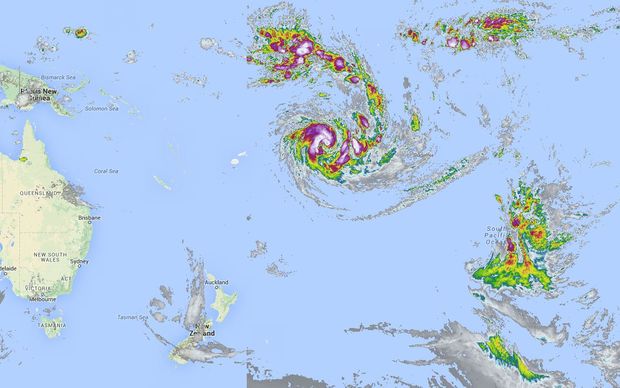 The cyclone picked up speed overnight, moving at six knots. It continues at that pace in a southerly direction, and is on course to pass by the Southern Cook Islands.

The Southern Cooks should expect winds of 55 kilometres per hour, and gusts up to 85 kilometres per hour. Periods of heavy rain and squally thunderstorms are also expected, as well as sea flooding, rough to very rough seas and heavy northerly swells.

On Sunday, Will Rowe said wind was already gusting up to 120 km/h on the atoll and it was unsafe to be outside.

"The seas are incredibly high coming from the north, the lagoon is boiling like a cauldron and we have fallen fronds and coconuts and other debris right across the island at present, so it's getting to the point now where it's going to become unsafe for people to leave their homes."

Mr Rowe said authorities had taken action and people were prepared with supplies.

"In terms of preparations, everyone's sort of got a go-pack so to speak, with food and water and everything, medicine that they require. The Palmerston Island Administration has been absolutely fantastic in assisting households on the northern side to evacuate which has already been done. The Palmerston Island people are very resourceful, hardy people and have been through all this before."

Mr Neale said boats had been moved to the centre of the 1.2 square kilometre main island, and houses and public buildings had been secured ahead of tonight's expected worsening conditions.

"As a low-lying island, you do what you can do. We've had some slight flooding in the lower areas, we've also had a bit of erosion."

However, Mr Neale said the cyclone's rain was welcome on the drought-stricken island, where there had not been any rainfall for two months.

"We welcome the rain, that's for sure. We're in the middle of a drought with the El Niño. Our last rain was when cyclone Tuni came by on the 13th of November."