A resident on the small northern Cook Islands atoll of Palmerston says the approaching cyclone Victor could do serious damage. 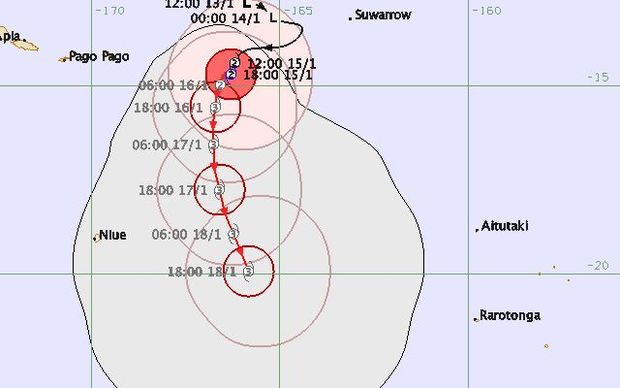 A map forecasting the path Cyclone Victor is likely to take through Cook Islands waters on Saturday and Sunday. Photo: Fiji Meteorological Service

Palmerston is closest to the cyclone's path, and a resident, William Rowe, says every warning has Victor inching closer to the atoll.

Mr Rowe says Victor is likely to be category three by the time it reaches its closest point, and authorities expect it to be as bad as a cyclone in 1991 which flooded about half the main island.

He says the weather has already deteriorated significantly, and residents in the north of the island are moving to higher ground.

"At the moment we've got sort of squally rain showers, it's blowing about 50 knots. The lagoon, which is normally quite placid, is looking like a cauldron of boiling water. We've got very, very heavy seas and we're expecting at high tide to have some pretty severe flooding up the northern end of the island."

William Rowe says the island is well prepared for cyclones and has supplies and communications equipment.

The director of the Cook Islands Meteorological Service, Arona Ngari, says Victor is expected to stick to the ocean between Rarotonga and Niue over the next two days.

Mr Ngari says currently, the only concern is for Palmerston, which is the closest populated area to Victor's path.

"The cloud band has certainly extended onto the island with some strong winds and some high seas," he says.

The executive officer of the Palmerston Island Administration, Arthur Neale, says the island's 59 residents have been preparing for the past few days.

He says incredibly rough seas have already eroded as much as 10 feet of the shoreline in some places, and the normally placid lagoon has turned very rough.

Mr Neale says boats have been moved to the centre of the 1.2 square kilometre main island, and houses and public buildings have been secured with conditions expected to worsen tonight.

"As a low-lying island, you do what you can do," Mr Neale said. "We've had some slight flooding in the lower areas, we've also had a bit of erosion."

However, Mr Neale says the cyclone's rain is welcome on the drought-stricken island, where there hasn't been any rainfall for two months.

"We welcome the rain, that's for sure. We're in the middle of a drought with the El Niño. Our last rain was when cyclone Tuni came by on the 13th of November."

The southern Cook Islands are expected to avoid a close encounter with Victor as it moves southwest between Rarotonga and Niue. However, Arona Ngari warns that cyclone forecasts are vulnerable to change and people should continue to monitor forecasts.

To the west, a tropical storm warning has been issued for American Samoa's Manu'a islands.

A Polynesian Airlines flight had to be diverted back to Pago Pago this morning because of the poor conditions, and ferry sailings for Saturday have also been cancelled.

In Samoa, the Disaster Management Office says a wind and coastal flood advisory is in effect for low-lying areas.