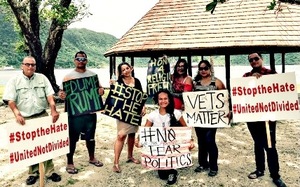 Mr Trump's representative, Alan Cobb, has been in the territory on his behalf to campaign.

A dozen people gathered at Utulei Beach, displaying signs with the messages "Unite, not divide", "No fear politics," and " Stop The Hate".

One of the protestors Ti'a Reid, says they wanted to send a message to Mr Trump that they don't agree with his campaign message, themes, and disparaging remarks.

When pressed for a response to the demonstration, Mr Cobb said, "It's a free country".

The 14 presidential candidates are competing for a majority support in eight different delegations, in order to be eligible for nomination as the Republican candidate for President.