A Tropical Cyclone Warning has been issued for all of Samoa. 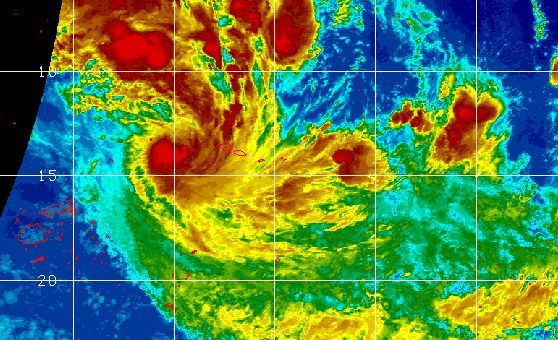 The cyclone develops to the northwest of Samoa Photo: US National Weather Service

The country's Meteorological Office says a tropical depression to the northwest of the country has been intensifying and is now a category one cyclone.

It is slow moving and continues to intensify as it heads closer towards Samoa.

A spokesperson for the office, Luteru Tauvale, says the national emergency office has been activated and there are reports of some low-lying areas being evacuated.

Heavy rain and strong wind warnings have also been issued, with fears of flooding and landslides.

Mr Tauvale says the cyclone is not expected to directly hit Samoa, but wind and rain associated with the system will create many problems.

" In terms of observations from the previous 24 hours the rainfall is well above the threshold of heavy rain. We expect conditions to worsen in the next few hours."

Luteru Tauvale says people should also avoid going out to sea with swells forecast to be as high as 13 to 15 feet.

The US National Weather Service has issued a tropical storm watch for neighbouring American Samoa.

Emergency management officials from the local branch of the Department of Homeland Security are advising the public to remain on alert and secure loose items.

Forecasters say a tropical storm watch remains in effect, along with a flash flood watch. It also added a Gale Warning for the territory's coastal waters.

It says the tropical depression was about 315 kilometres north of Niuafo'ou at 1am local time, moving east-southeast at 20 kilometres per hour, and slowly intensifying.