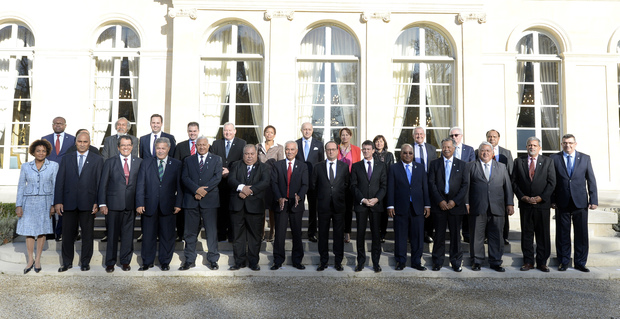 The French president, Francois Hollande, says he hopes next week's COP21 conference will achieve an ambitious and binding agreement to mitigate climate change.

Addressing a summit with Pacific leaders in Paris, Mr Hollande said the accord should try to meet the target of less than two degree temperature rise by the end of the century.

The French foreign minister, Laurent Fabius, told the meeting that, "a maximum should be two degrees, 1.5 degrees."

Mr Hollande has also called on Pacific leaders to make New Caledonia and French Polynesia full members of the Pacific Islands Forum and add Wallis and Futuna as an associate member.

He says this is not meant for France to disengage but rather to engage with the region even more.

New Caledonia and French Polynesia became associate Forum members in 2006 - three years after Paris told its inaugural summit with Pacific leaders that it wished to integrate the two territories in the regional political architecture.